CAPT. PETER MASON SAS AND MI5:
Thanks to the kind staff at the CMSM museum in Maldon, England I now have better quality photos of Peter and Pru Mason's personal daggers. They will be featured in the section of my book on Peter Mason. Should you be in the area please go visit this great Museum. http://www.cmsm.co.uk/
BEFORE THERE WAS JAMES BOND, THERE WAS PETER MASON

One of the more intriguing stories you might like to investigate is that of Capt. Peter Mason. Mason's life and his autobiography, "Official AsSaSsin," provides the basis of some of the James Bond exploits, as recreated by Ian Fleming. Finding a copy of the out of print book was not easy but worth the effort. Mason was involved in the late war and post-World War II hunt for Nazi war criminals. It was none other than Winston Churchill who gave his unit their "license to kill." After the war Mason and his lovely wife Pru operated a "Dude Ranch" in England complete with horses, western tack, and real six-shooters. Looks like they had a great time entertaining Brits. Mason also operated an arms shop in Lewes, England. Doubtlessly this is where he acquired some of his WW-II daggers. He and his wife moved to the USA where I believe he was active in the Rodeo circuit  for a while. They eventually moved to Western Canada. For obvious reasons his past life makes his present life an enigma. As you note on the reference page I would really like to talk to him and ask him some questions about his John Paisley, Fairbairn style knives. Two of them are illustrated in his book. I am sure that he holds the answers to many questions on the early knives.

Many years ago, Mason was also featured in a TV series called "Spy-Tek". In that interview he displayed many clandestine firearms he had used, or had knowledge of. After a bit of searching I managed to purchase an old VHS set of the series which covers much of the Cold War era.

NOTE: My search for more information about Peter Mason led me to a terrific website for the Combined Military Services Museum. Here is the link to their website. http://www.cmsm.co.uk/ They have in their collections many of Capt. Peter Mason's personal knives, many of them unique, one of a kind knives. You will find photos of them on the new page dedicated to the CMSM under the references section. On another note, here is a correction from the historian at the CMSM museum.

"Hi David. Thanks for you putting us on your website. One small correction, Fleming was nothing to do with the SAS. He was in Naval Intelligence and was responsible for setting up 30 Assault Unit. This was principally a Royal Marine unit who’s task was to get into German Naval installations and steal codes etc. The unit employed civilian safe breakers who were given the opportunity to get out of prison if they “volunteered.” Clive MacPherson
Below: A French Agent's dagger shown with a copy of Peter Mason's autographed book "Official AsSASsin." Note the two capitalized letters to make "SAS." Capt. Mason certainly has a sense of humor. 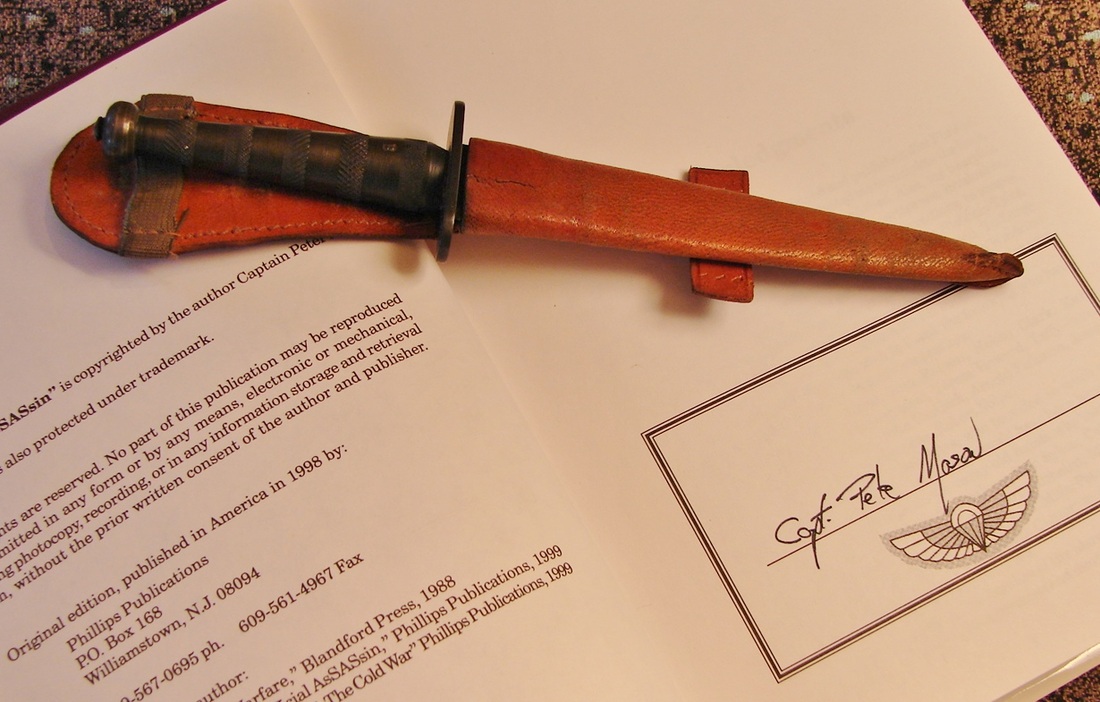 Note: Some of the rarer and more controversial knives in our expanding collection are from the collection of Peter Mason via other collectors.  According to one knowledgeable source, after WW-II ended, Mason and a couple other collectors were in stiff competition to scavenge up every rare or clandestine knife they could find.