Alloy Handled Knives
included here are both cast and lathe turned varieties of various metals
This knife has a handmade aluminum hilt fairly well shaped and fitted. The original brass guard is used and based on it and the brass top nut I am sure this knife was originally a wood hilted version. The original sheath has been trashed up with some black elastic which was probably added for leg carry of the knife and sheath. While the elastic is old, I doubt if it is WW-2 vintage. 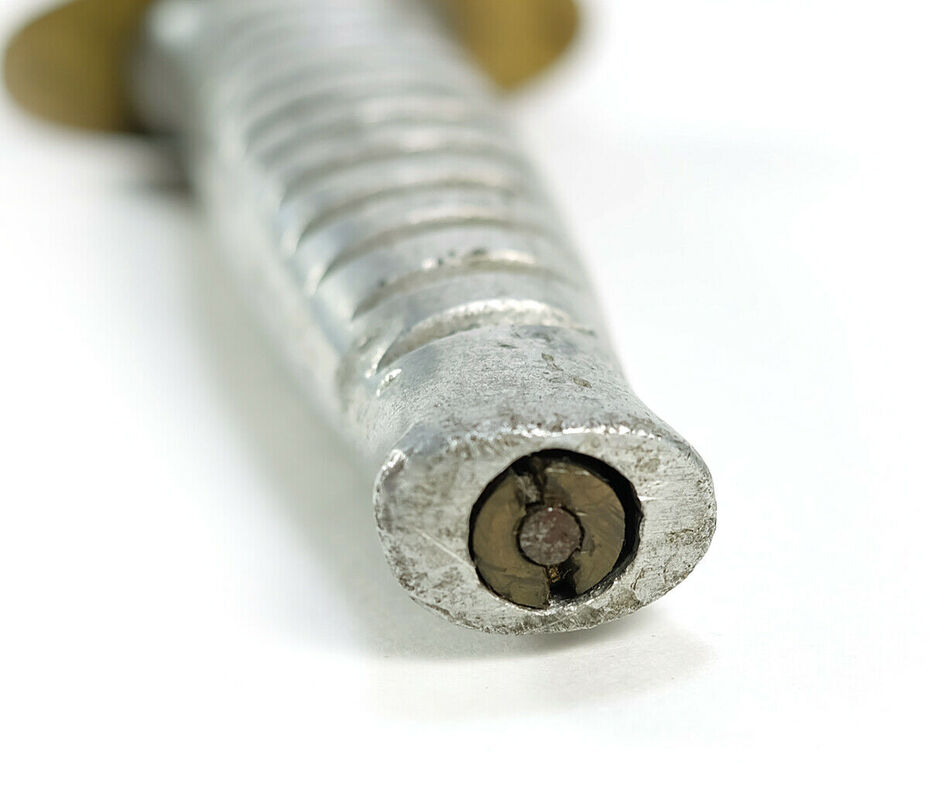 Below: This is easily recognized as India-made by the "Tulwar" shaped handle. This one's handle is made of aluminum. The knife is completely sterile. A nice solid oval guard is made from steel of a good thickness. At close to seven inches in length, the blade is very typically Fairbairn in size and shape. The sheath does not fit it properly and may well be a long ago replacement. These knives are not easy to find. The chunky handle actually fits the hand quite nicely. This knife has a full length tang and top nut, unlike some Indian knives whose handles are soldered on.

Below: Aluminum handled, theater-made, knife from WW-II. This is a very nice example of the work often turned out on board ships or in machine shops across this nation. For now this knife is a mystery. It fits my hand comfortably. There are no markings and it is another example of a nicely crafted Theater-made, knife. I bought it because I like the proportions and general design. The blade is wider than a standard F-S so it was completely custom made, not adapted from an F-S. 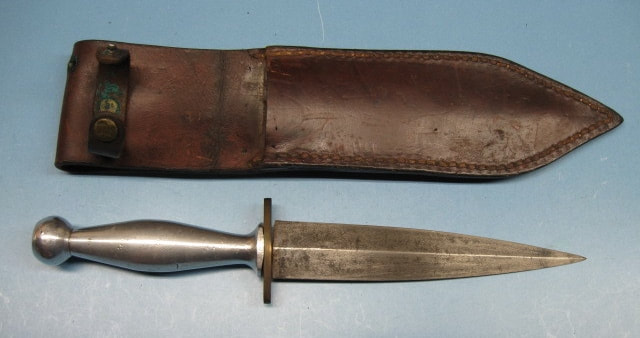 Below: A WW-II commando style knife found buried in a northern European forest. It was made by Wm. Menke & Co. Please contact me if you have any information concerning this company. This knife is a little larger than the standard British models.
﻿﻿﻿﻿Below: Author and collector Ron Flook provided me with these photos of a knife identical to the one I bought. His knife came from Canada, I forget where mine came from. So now we know there were at least two of them, making my guess that the number 33 is probably a serial number more likely correct. How many were made may never be known unless someone happens upon this site and has knowledge of the maker. Stranger things have happened. This knife includes a very nicely made sheath and an unusual inscription. This knife is stamped "43".
Here is some additional research on this style knife provided by a visitor to our site. "I am Canadian and a history buff and collector. I have a number of F-S knives and other types of Militaria.  I saw the picture of your knife and decided to do some investigating. I believe you are right that it is Canadian and probably not made in large numbers. I found a site “Canadian Army Training Centres of  WW2. “ I found that A5 C.E.T.C.  stands for  A5 Canadian Engineer Training Centre at Camp Petawawa, Ontario. The Camp  was founded in 1905. The number above the name is a Canadian Regimental number of WW2. In that war the soldiers Regimental number started with a letter, such as A, C, D, etc. or in this case B.  This signified the area of the country the soldier came from. B tells us this soldier was from central Ontario Military District 2.

This was not done in WW1 nor later I am not sure about the Korean War but I don’t believe so. Probably they were made in a shop on the base in small numbers. That’s Just my guess.  I enjoyed doing the search. I like your site.  I hope this helps you.
Best Regards  James E Johnson
Melbourne Ontario Canada"

Thanks to Mr. Johnson for his assistance! 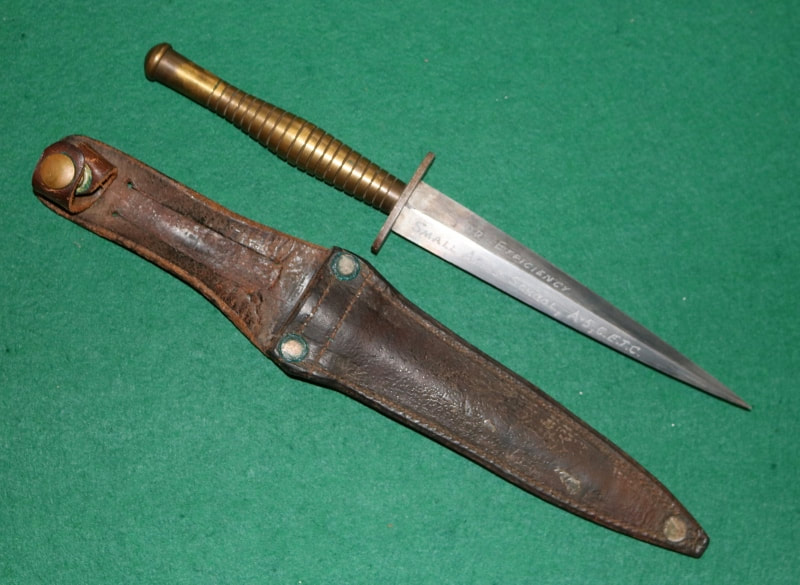 Below: An extremely well made and unusual knife with turned bronze handle. It is marked on the guard "33". I am going to attribute it to India or that part of the world. If you have seen any others please email me.  It turns out these are probably a Canadian product!

Below: The blade on this knife is a thin, roughly finished blade, similar to a late war or post-war P-3. It is illustrated with its original sheath, a style often referred to as a "hunting" knife sheath. There is no known manufacturer as this is written. The prices asked for these knives have sky-rocketed based perhaps in part by my description of how uncommon they are. The quality is only fair compared to other knives of the era. 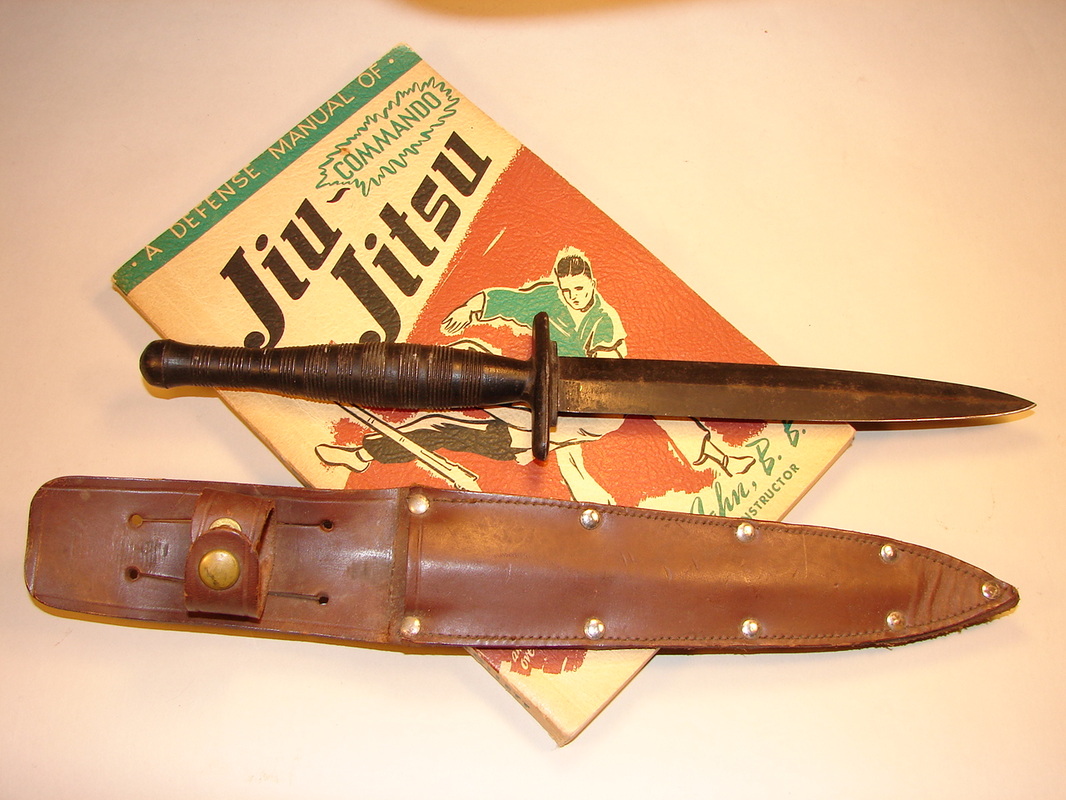