Wood Hilted Knives:
Quite often wood hilted knives are mistakenly categorized as "Post-war" knives. They were available through the later years of the war and most likely many of them were private purchase, although some were known to be issued. Other writers try to define them as only for air crews, or boat crews, but they were used universally.
Below: A totally different style of wood handled F-S that I have not come across before. When I first saw the photo I thought it was a metal handle. The seller said it may be post-war. It has the look of one made in India or Pakistan back in the 60s. The quality is quite good, for example the guard is well made and fitted. The blade is a bright bronze temper color and nicely ground and polished. even the sheath is a cut above those often found on post-war knives. I like the handle shape quite a lot. 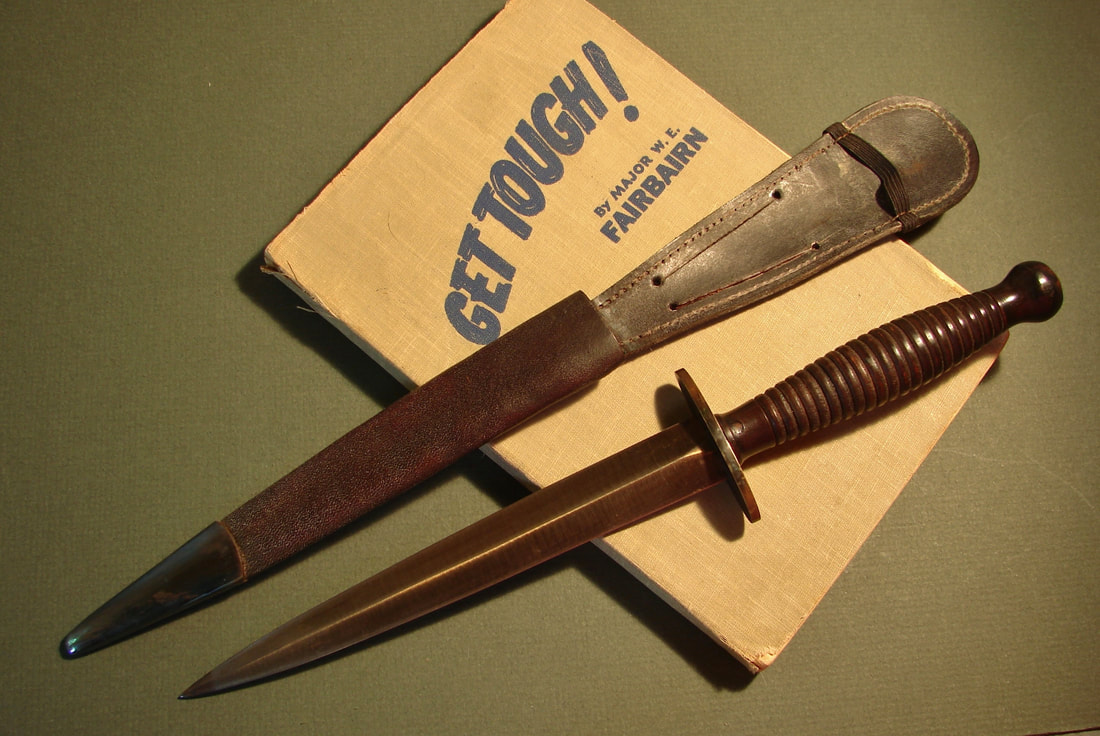 Below: A rather homely looking knife but the handle is more comfortable than a 3rd pattern. In fact the handle is shaped a lot like an Applegate-Fairbairn. The handle is made from two pieces of a dense walnut and pinned through the hidden tang. Clearly, for some reason, the owner chose to not use the original guard, which would have made for a more professional look. So another ugly duckling joins our collection of wayward F-S knives. The sheath appears to be much more recently made and will no doubt be replaced.

Below: We learned from a Mr. Grant McLeod that this knife was made by "Alexander of Sheffield". R H Alexander was an importer and dealer in cutlery in New York  from 1850-1876. Likely used in WW-II but now we know the knife could be a lot older. The walnut handle scales are secured by four small brass pins to a full tang blade. Its heavy leather sheath, which I am reasonably sure dates to WW-II, is shown. Overall, the knife and sheath are in excellent condition and appealed to me aesthetically. I really love the look of this knife. It looks as though the blade was originally a little bit longer. 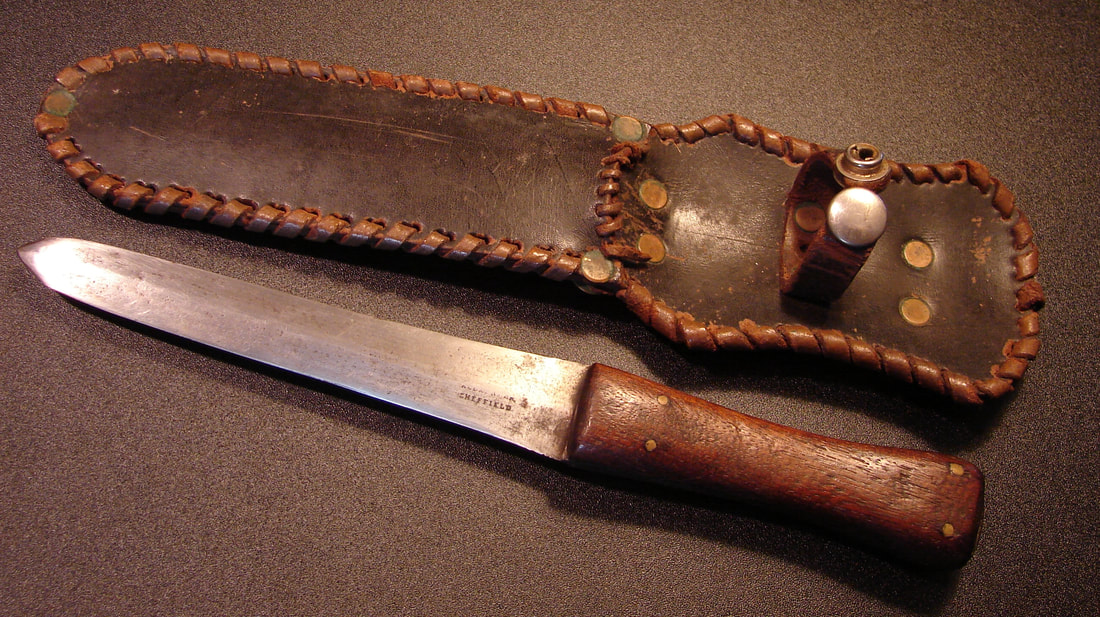 Below: Here is a beautiful spear point dagger made by Alexander of Sheffield probably mid 1860 to 1880. The signature stamp is the same as on our dagger. This fine antique is listed for sale by Steven Still Antiques at https://www.stevenfstillantiques.com/product/bowie-knife-stamped-alexander
Below: In less than ideal condition, a WW-II Wood handled knife. I bought it because it was by a maker (John Blyde) I do not have any other knives by.  I'll post better photos once it arrives. The sheath was a completely cobbled-up homemade affair and it may or may not be period to the knife. I actually decided to not remove the old electrical tape and in fact glued the loose end down. Who knows what lies underneath. The knife is functional and ready to go to another war if needed.

Below: A nice pair of pristine wood handled knives donated by our good friend in California. They may have been produced in India. 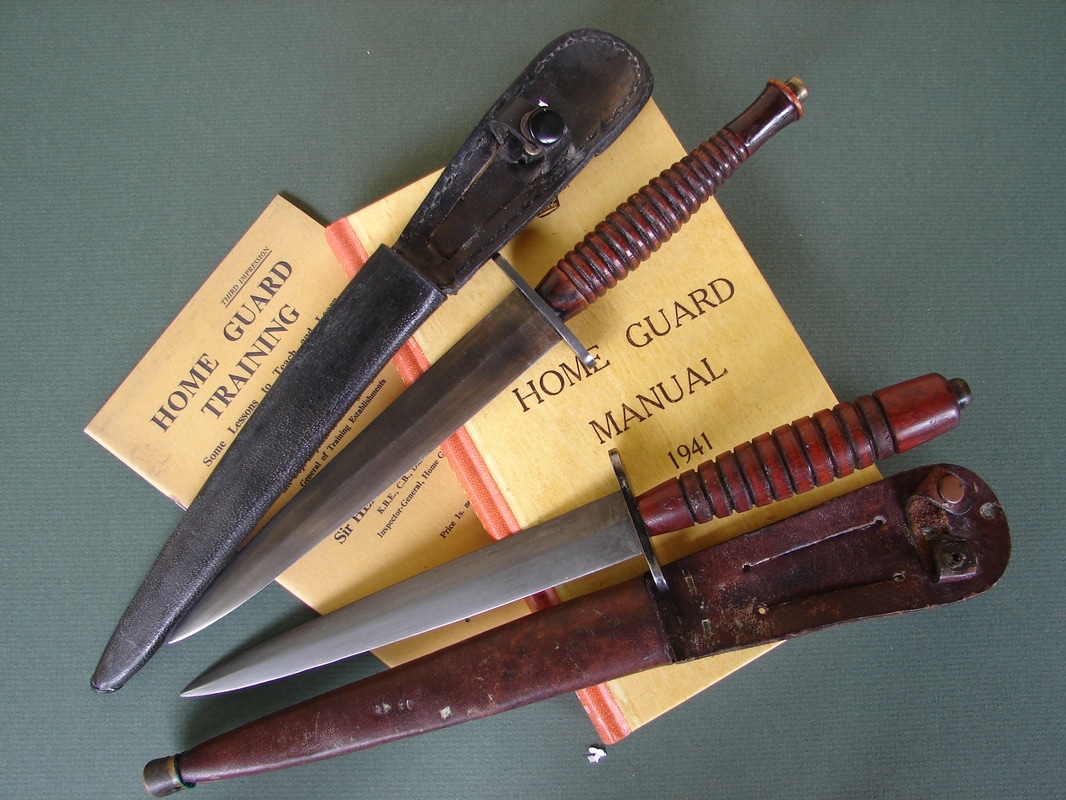 Below: An unusually weathered looking knife. The handle condition has me totally stumped. I cannot imagine what caused this sort of wear pattern to the wooden handle and the steel in the blade. The wooden handle is hard and not spongy. The blade actually looks like a layered (Damascus) steel but it is not.
Below: Underneath all of this cord wrapping is a wooden 3rd pattern handle (I think) with what looks like multiple cracks. The sheath is covered in a old brown packing tape of some kind. It had this tie down loop made from an old battery cable but the wire has parted. I left the tape in place.

Below: An extremely unusual commando knife! The handle has been replaced (or a bare blade mounted) with a very dense piece of root or possibly bog oak. It does not appear to have been shaped using any tools but attached in its natural, organic shape. (The sheath shown did not come with it.) 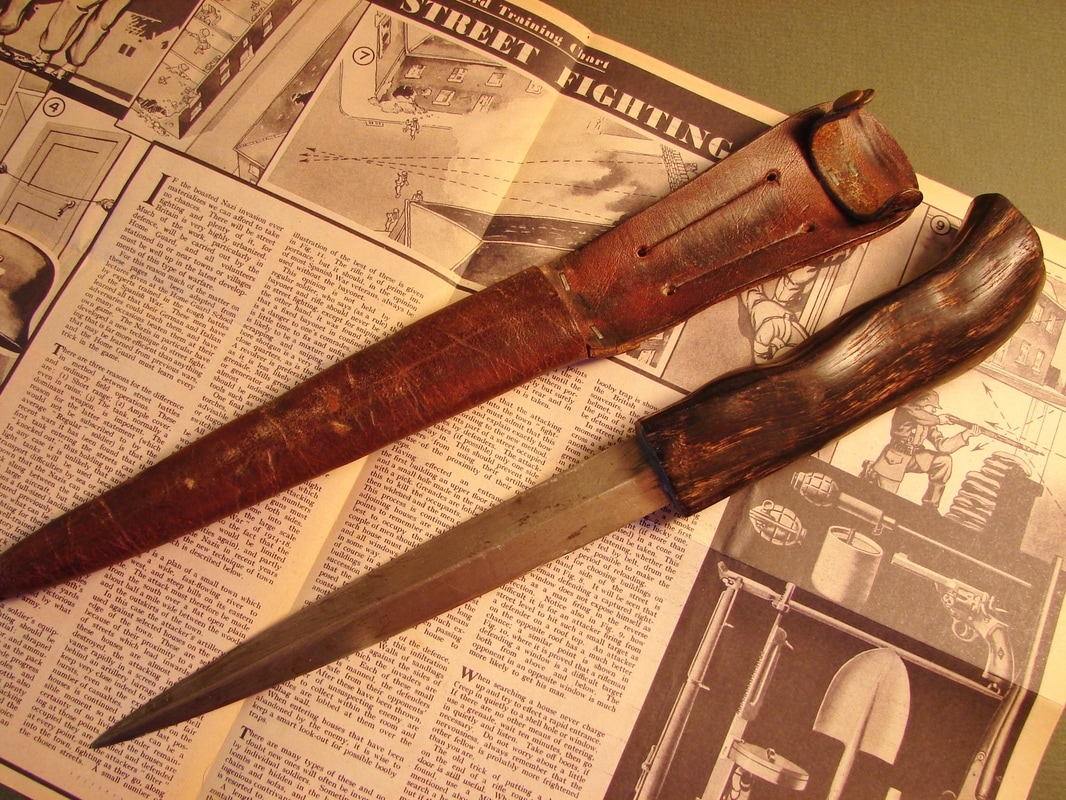 Below: Here is a spray of wood handled fighting knives. It seems that the wood handled knives had no specific sheath issued with them because all of mine came in assorted styles. They seldom have any inspector stamp or broad arrow. This might indicate a large percentage of them were private purchase, commercially available knives.  I do have a reference to a WW-II Vet telling his grandson he preferred carrying his wood handle knife to his First Pattern. The son is in possession of both knives i believe. 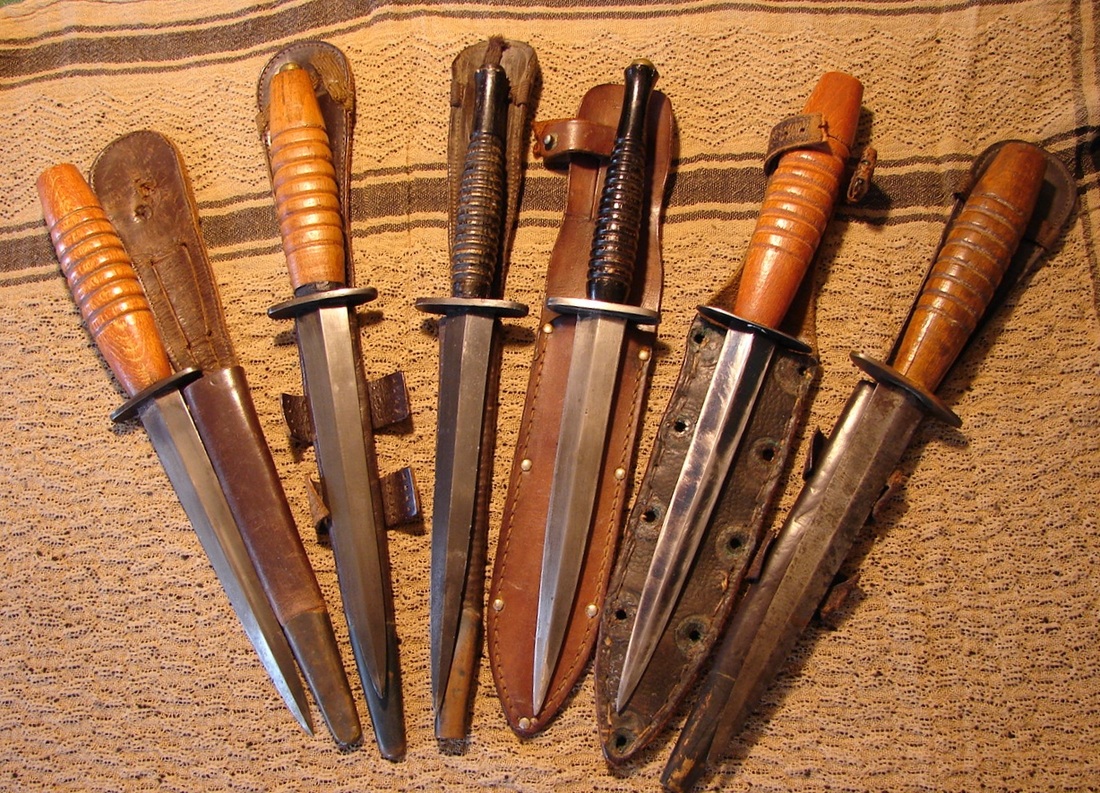 Below: Fat wood handled knife housed in a home-made sheath of very heavy, stiff leather. It appears to be machine stitched and has a watch band type strap for knife retention. There is no belt loop so I assume it was worn simply thrust into the waist and held in by belt tension. The wide flap would prevent it from falling through the belt and being lost. 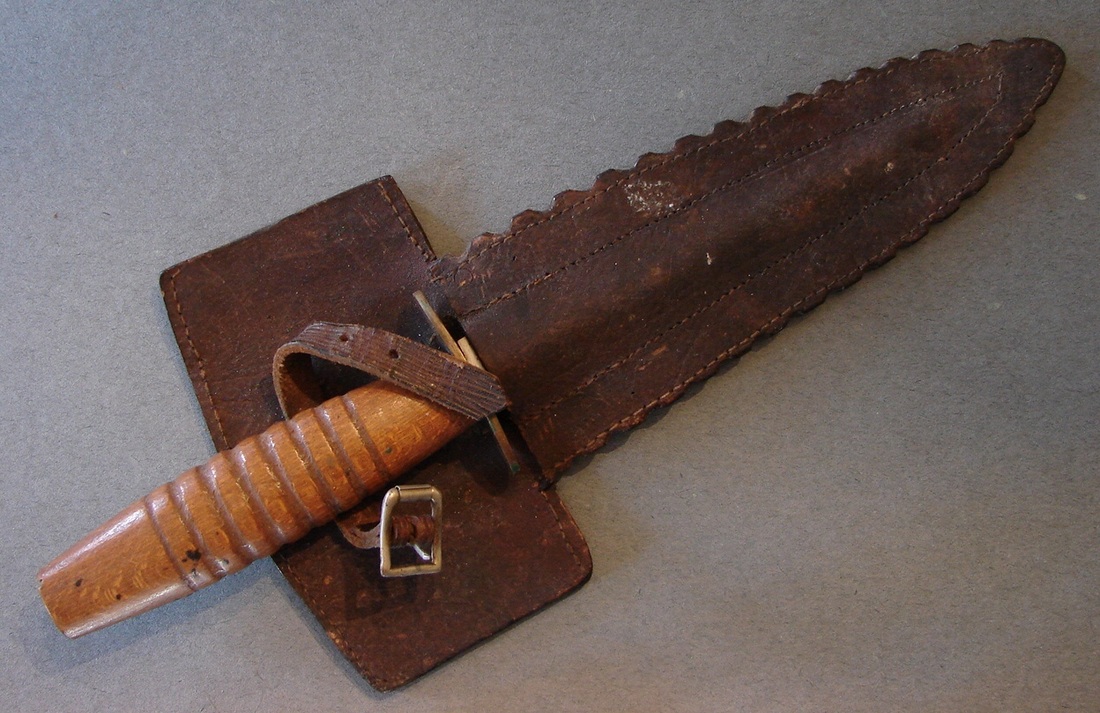 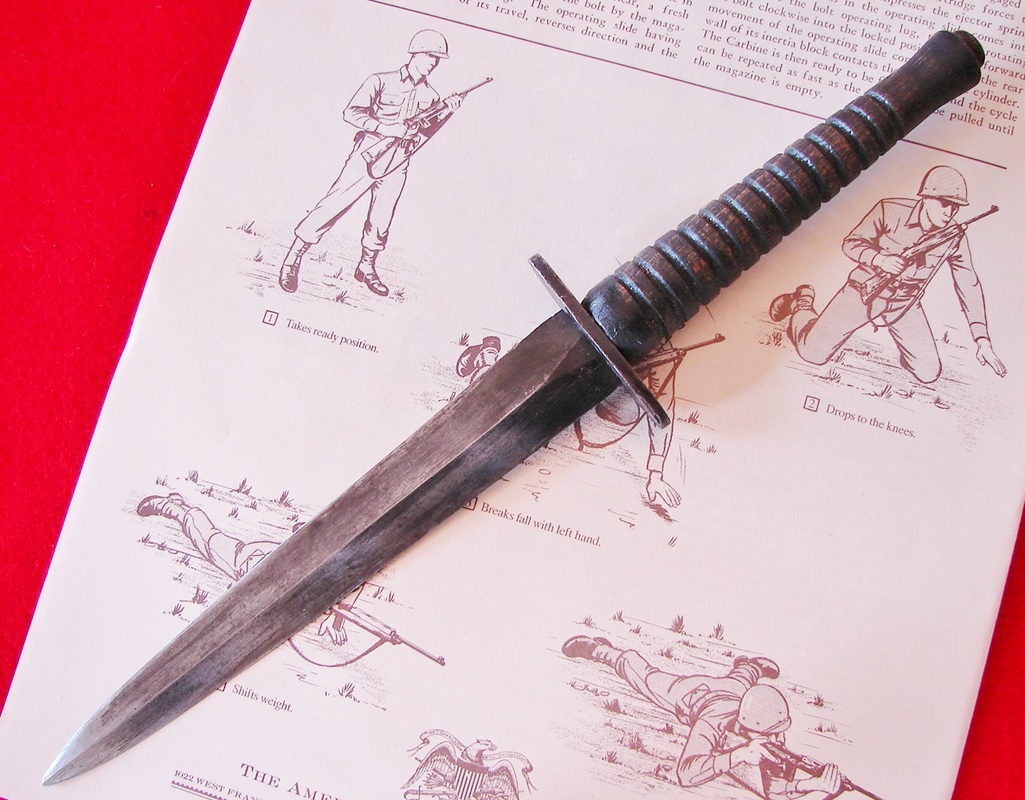