Knuckle Knives
There is a certain fascination among some fighting men for knives with knuckle guards, push daggers, etc. I have never been that attracted to them because of the limited maneuverability that the knuckles cause. I have learned to be less judgemental about such things. Here are the few that I have bought because they appealed to me or during a weak moment.
Below: Before you get too excited this is a reproduction by H.G. Long. They did a great job, although I would have preferred a less highly polished finish on the blade. As impressive as the knife is, the quality of the sheath is also noteworthy. It is a sturdy product unlike the flimsy commando knife sheaths common on today's Third Pattern knives. These knives are deceivingly petite compared to most WW-II knuckle knives. It is 9 inches OAL with a 5 1/2 inch blade. The BC-41 holds best with the blade facing to the right. In a trench melee I think it would be a serious fighting knife but on open ground I would much prefer the ergonomics of a standard Second Pattern F-S. 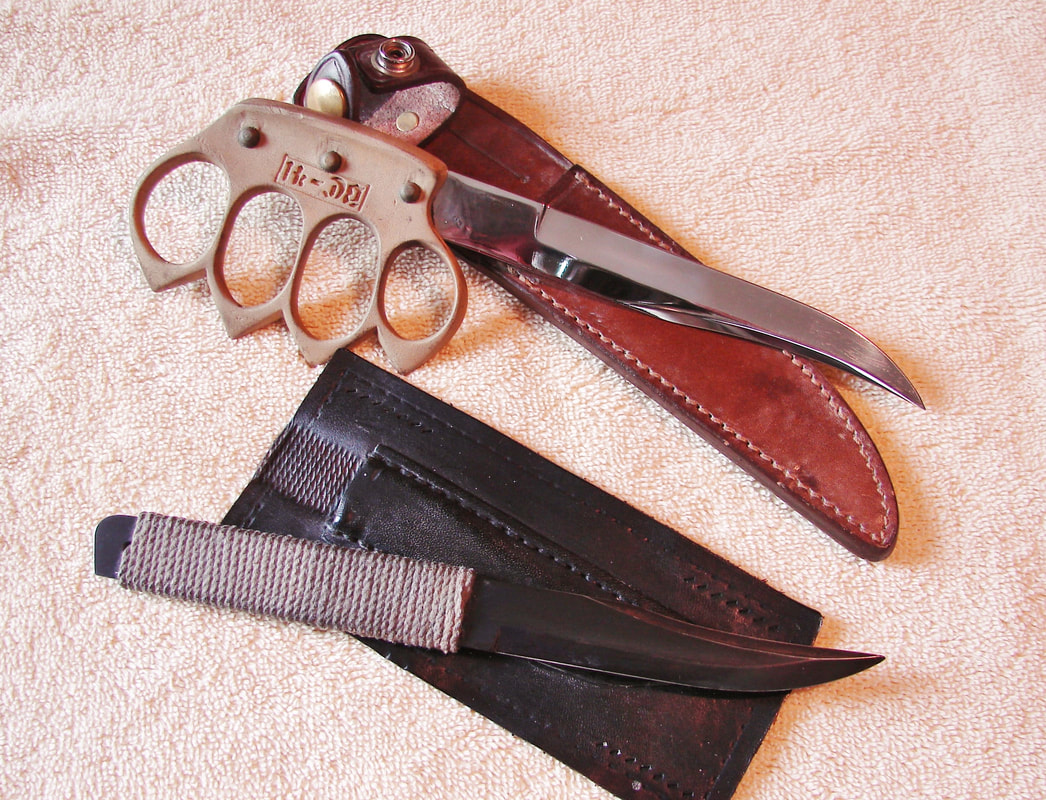 Below: A rather unusual knuckle guard adaptation with a third pattern blade. The heavy brass handle is stamped with the owner's name, "Pte. Roan" on one side, and "1944" and a non-governmental broad arrow on the other side. The lugs on the thick brass guard are made from acorn nuts. I'll get a better photo eventually since this one is kind of fuzzy. 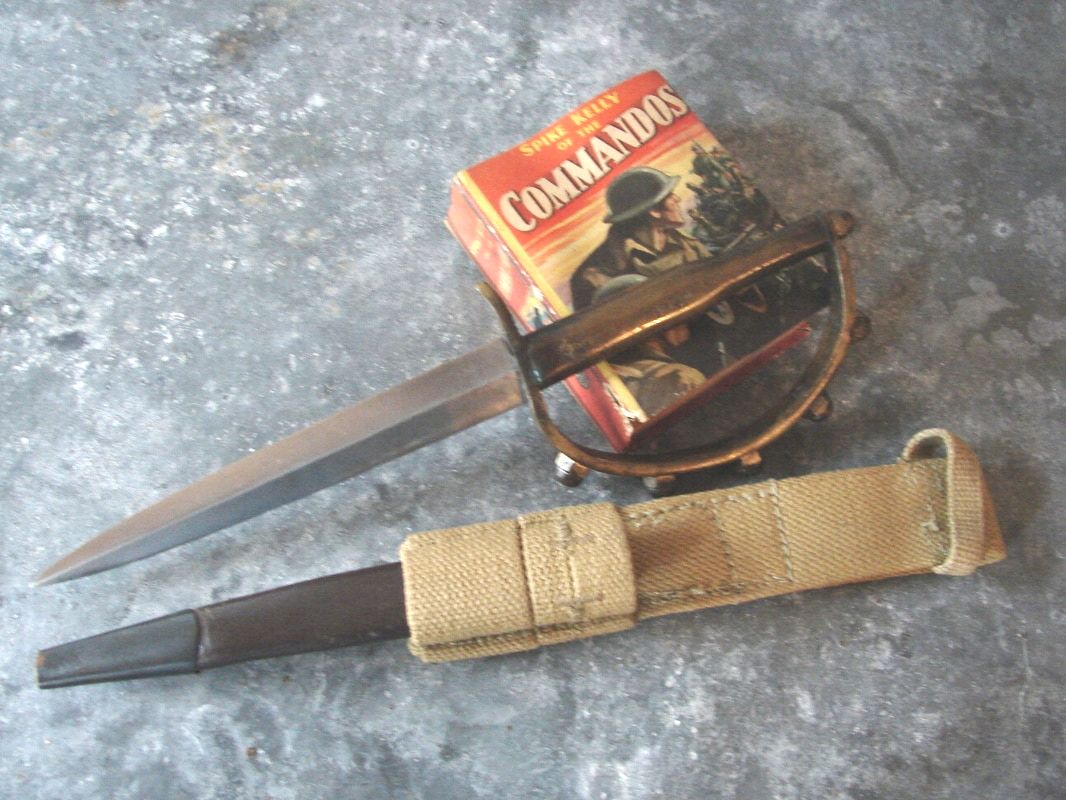 Below: This unusual punch dagger probably dates to WW-I and was designed for trench warfare. The blade appears to be made from a triangular file. The handle is cast in place and the tang extension has been securely peened over a brass washer. I found a saddlery shop in the UK by this name who is also listed as doing military work. They are also in the same town where a die casting firm made handles for third pattern daggers. I don't think this is a coincidence. It is a well made piece, unfortunately its sheath is missing. 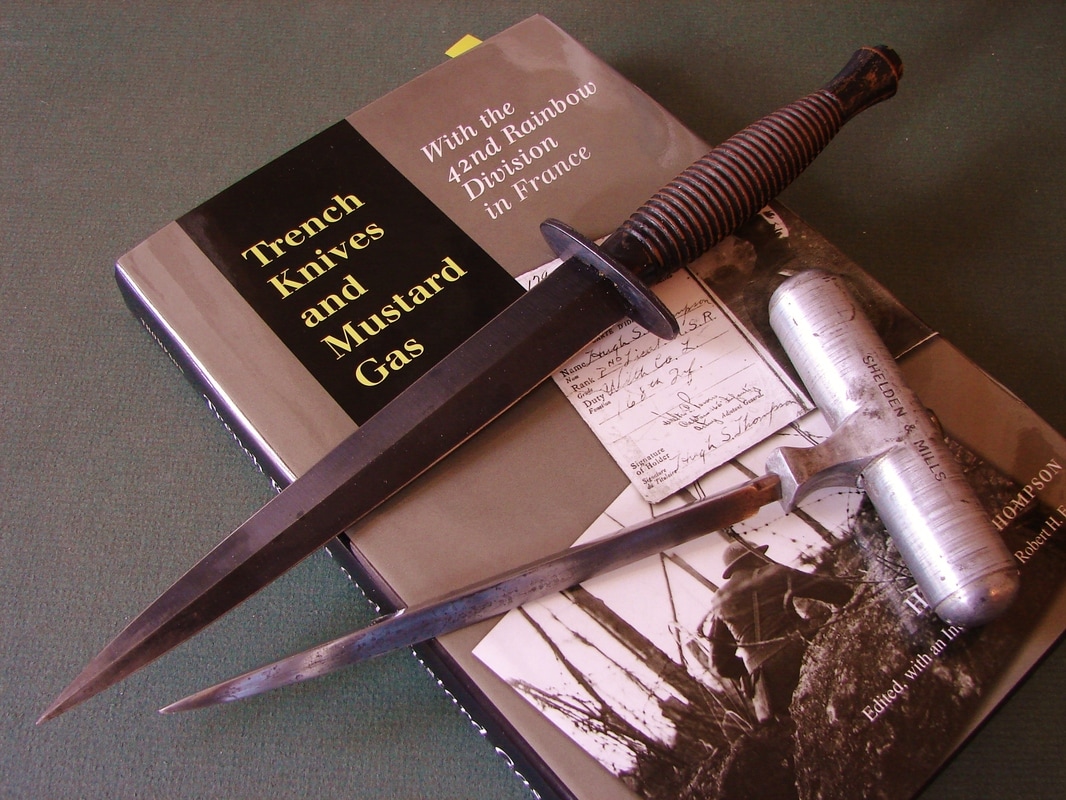 Below: An unusual third pattern knife with brass knuckles. The seller said he suspected it was India-made and I have no reason to think otherwise. The grip is made from ebony and slotted to fit around the knuckles. A very tight knife with no markings anywhere.The blade is well made and thick in cross-section like a second pattern blade. The sheath was obviously made for the knife including the unique retention strap. 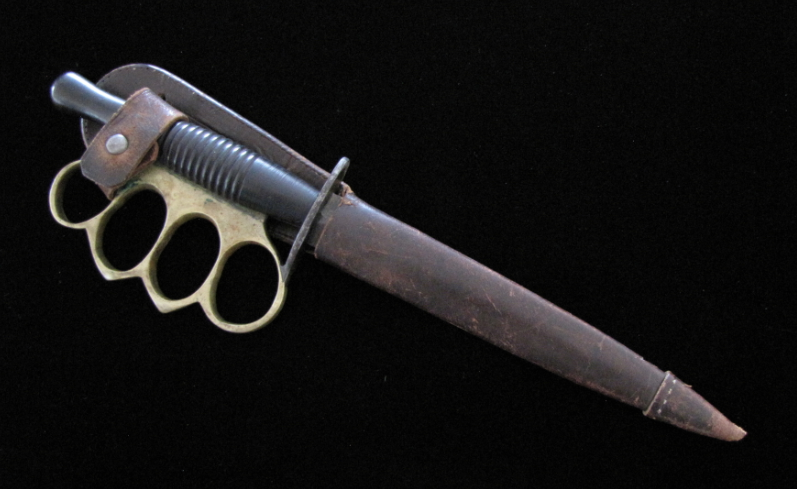 Below: "Death's Head" commando knife from India.These are post war knives commemorating the "Auspicious Wedding of Princess Jodhpur April 22nd, 1951."  Obviously a post war knife, they are a very poor fighting knife but an excellent set of brass knuckles. The blade and handle are nickle plated. A very short tang on the blade is set into a notch in the handle and either pinned or soldered. I cannot tell which at this time. It came with its original leather sheath which resembles those made by (or for) Robbins of Dudley, and its original colorful sash. Despite its rather odd shape, the handle is quite comfortable and makes an intimidating weapon. But, when held, the blade is angled at 90 degrees, making it rather awkward to slash with.
Below: Here is an enigma of a knife. No clues who made it or when. No stamps or markings anywhere. Some will say its a fake. A Fake of what I ask? In my 1982 Frederick Stephen's book "Fighting Knives" there is a photo of one very similar. I can remember seeing other photos throughout the years. Someone went to a lot of work to shape the brass knuckle bow and bend it to fit. The handle is lathe turned from walnut with little to no finish on it. I bought the knife for a price that would have made all the work faking it extremely unprofitable. Was there someone out there making these up on request or were they the product of individuals mimicking WW-1 trench knives? It came with this "modern" (1960s) F-S sheath but we know you cannot date a knife by the sheath with any degree of certainty. It actually holds pretty nicely and in the hand of a skilled fighter makes a serious fighting knife.
Below: You're Right, this is not a typical F-S knife but it may have been carried in both WW-! and WW-II. It is a Push Dagger (or Punch Dagger) made by Robbins of Dudley, Worcestershire, England. I found the following information on the web page of Plowshare Forge, a maker of reproduction knives. http://plowshareforgeknives.blogspot.com/2009/07/robbins-of-dudley-push-dagger_3610.html
"Little is known about the company's wares other than that, except during the war, they didn't produce knives at all. At one point they were registered as "fender makers", the fireplace kind. When they did make knives they specialized to the extreme. They produced a line of knuckle knives, push daggers as well as more conventional blades all of which comprised an aluminum handle cast onto the blade." This one came with its original sheath and double fullered blade. Reproductions are available from several sources but originals are exceedingly rare. According to one source reproductions were made even during WW-II. One man has insinuated this is a fake while another man, whom i trust a lot more, says it is 100% correct. Such is the life of a collector.
I have recently seen several of these appear on Ebay with very suspiciously precise looking names engraved on the bottom of the handle. The sheaths also looked new, but weathered. I hope I am wrong and that they were originals.