John Ek Commando Knives
EK Knives serving military fighting men since the 1940s.  World War II, Korea, Vietnam, Desert Storm, Iraq, Afghanistan
Ek Throwing Knife: This is an Ek knives throwing knife from Their time in Richmond, VA. It is a reproduction of those made during WW-II and later. It is made from one piece of steel and is indestructible. it comes with its original leather sheath. The knife could be used for stabbing but there is not much edge length for cutting, but then the thumb daggers and lapel daggers do not have much edge either. I do not know if there are any known incidents of this type of knife being used in combat. I am not a proponent of throwing away your weapon in combat!

Below: My latest Ek Knife from KaBar is really a winner. I like it a lot. The  handle is more ergonomic than some of the previous ones due the the deeper hollows in the handle scales. The 6 1/2 inch blade is well balanced by a 5 7/8 inch handle. I measure the blade at 0.150 inches thick. That is pretty comparable to a WW-II model. I especially like the guard on this knife too. What I DO NOT like is the sheath, at all! I rant about it on my white shadow blog so I'll spare you the rant here. I am also not crazy about the tiny little crest they put on the blade 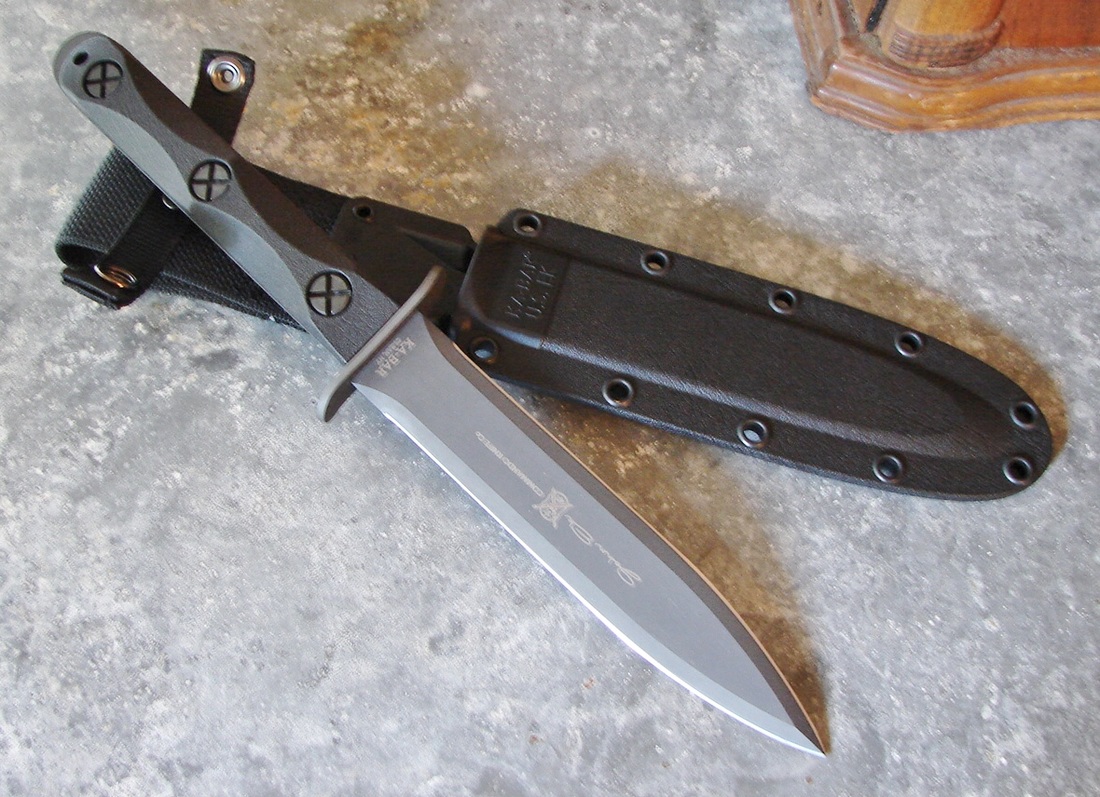 Below: This new model is sure to cause some purists gastric distress, whether they be Ek or Fairbairn die-hards. Personally I like this model, a lot!  Ek President Robt. Buerlein spent many months working out exactly how he wanted these knives to look and feel. Giving birth to a new knife design can be a long and painful process, and I'm glad that Mr. Buerlein stuck with it. For me it was worth the wait. Since I am a member of the Ek Knives "Historical Edition" collectors series I anxiously awaited these newest models which combine the best of both worlds, the rugged Ek blade with the fencing foil grip of a Fairbairn Sykes. Note that the guard has been appropriately scaled down to enhance the aesthetics while still providing functional protection for the user's hand. As an added bonus Mr. Buerlein reserved my 007 serial number for my set of knives. Thanks to Robert and the great folks at Ek Knives for some sweet knives and managing delivery before Christmas. Call them today and order a knife. Tell them 007 sent you : ) 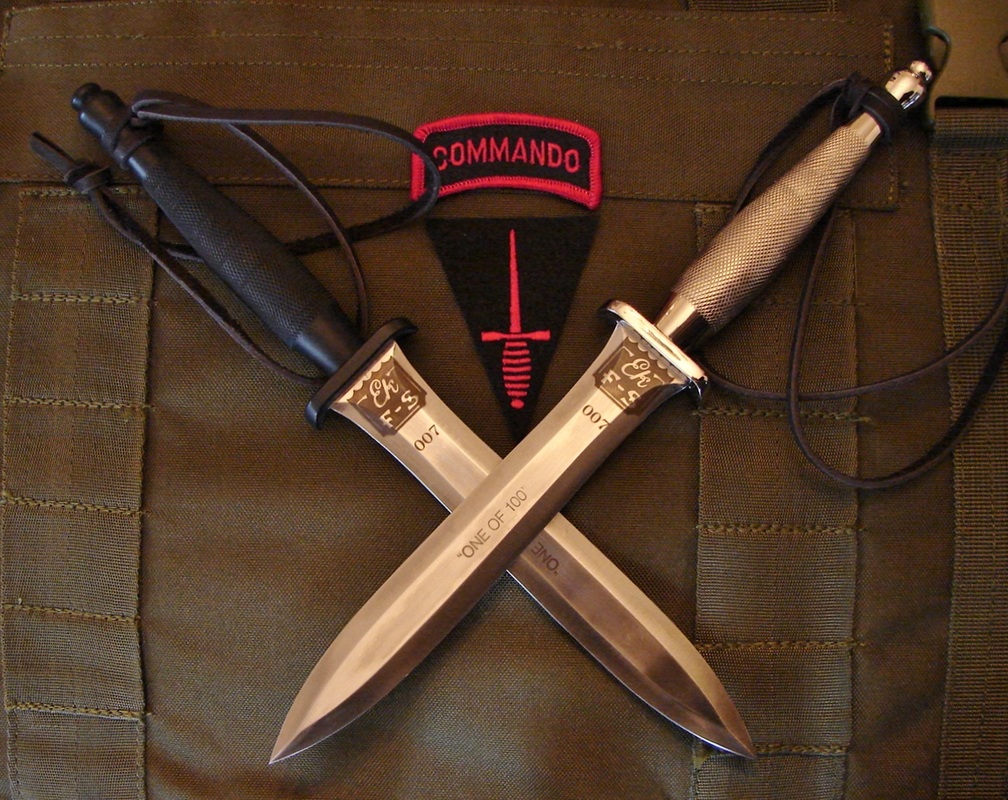 Below:  This Ek knife is based on their tribute to the "F-S" with the full tang construction and hard maple handle scales. Note the shape of the skull crusher which is formed like the pommel of a F-S knife. Replicating WW-II construction techniques, the scales are affixed by poured lead rivets. It is proudly etched with the name, the "F-S MKII" logo and my serial number 007. While some will complain about the use of the F-S etch on an Ek Knife, I would say that: "Imitation is the sincerest form of flattery." 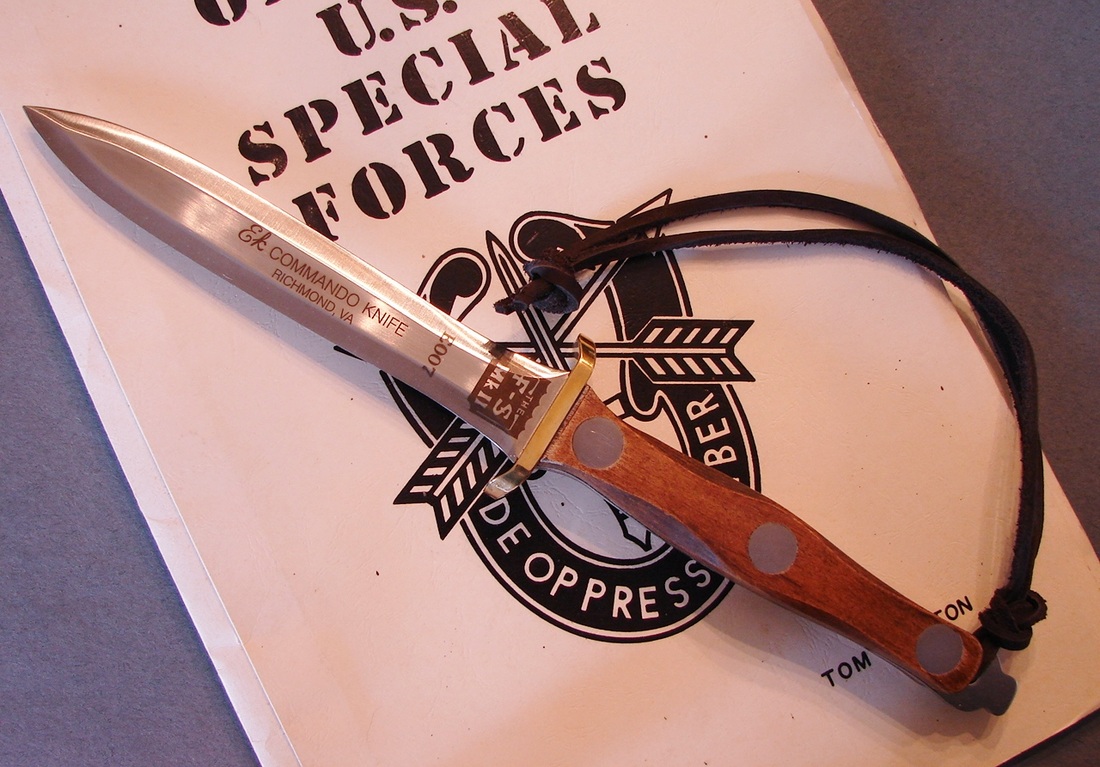 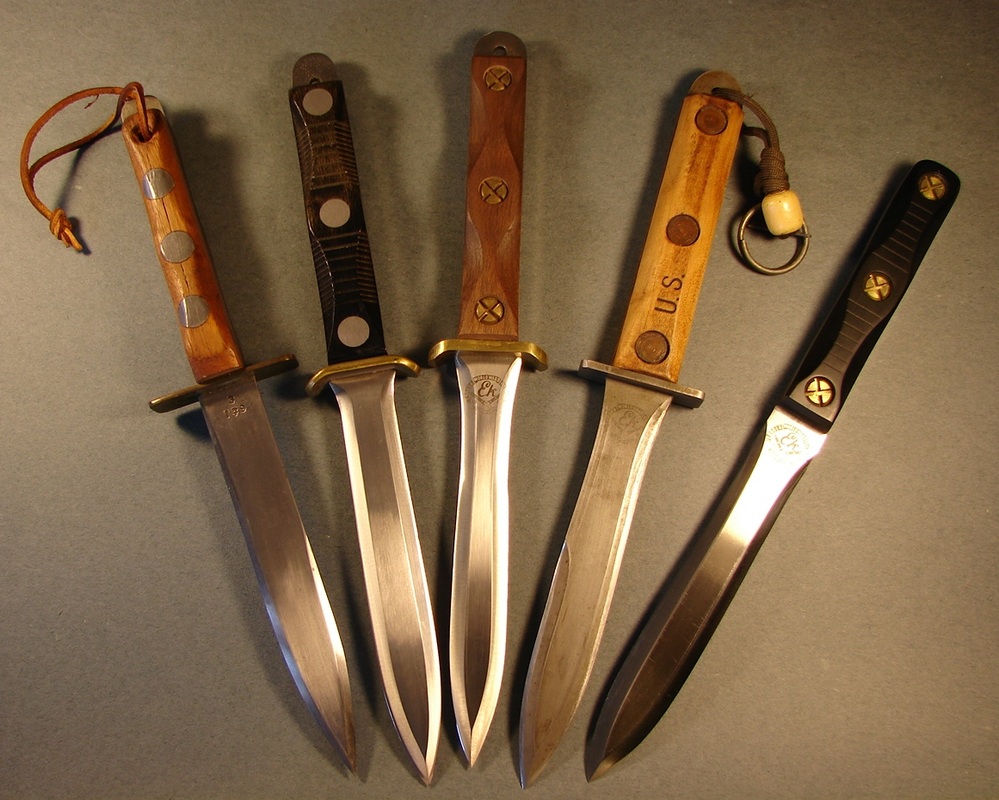 From left, to right: Vietnam Era Ek model 3,  Ek P-4 double edged with guard, Pakawood handles and lead rivets, Ek G-4 walnut "Gunner" grips, Ek Desert Storm "Warrior" model with grenade pin on the lanyard, Ek M-2 double edged without guard.
GREAT NEWS: from the great people at Ek Knives. I spent some time on the telephone with Mr. Buerlein talking knives in general and he advised me of an upcoming replica of the first ever Ek Knife. This new Model One was going to closely duplicate the original model 1 which was so popular with fighting  men in WW-II. He put me down on the list to receive a knife and it arrived a few months later. It is illustrated here. One of the first things to greet my eyes was a very nicely made walnut, glass-topped display case. The knife box itself came wrapped in a waxed paper. Upon opening it I was further amazed to see that the box was a reproduction of the original boxes that Ek Knives were shipped in. The attention to detail and quality has always been one of Bob's hallmarks. The box seemed to set the stage for the knife which was further protected by a white linen bag. Finally I pulled out the knife and was tremendously impressed with the finish on the blade, crisp etching, razor sharp edges, traditionally shaped and colored maple handle scales properly held in place with lead rivets. It is a superb collectors piece and fully functional fighting knife. I almost forgot to tell you about the reproduction sheath, made in the original style of heavy leather with a nice long tie down thong and reinforced with rivets. Kudos to the entire team at Ek Knives and Bob Buerlein for a quality job. Thanks Bob for the 007 serial number! 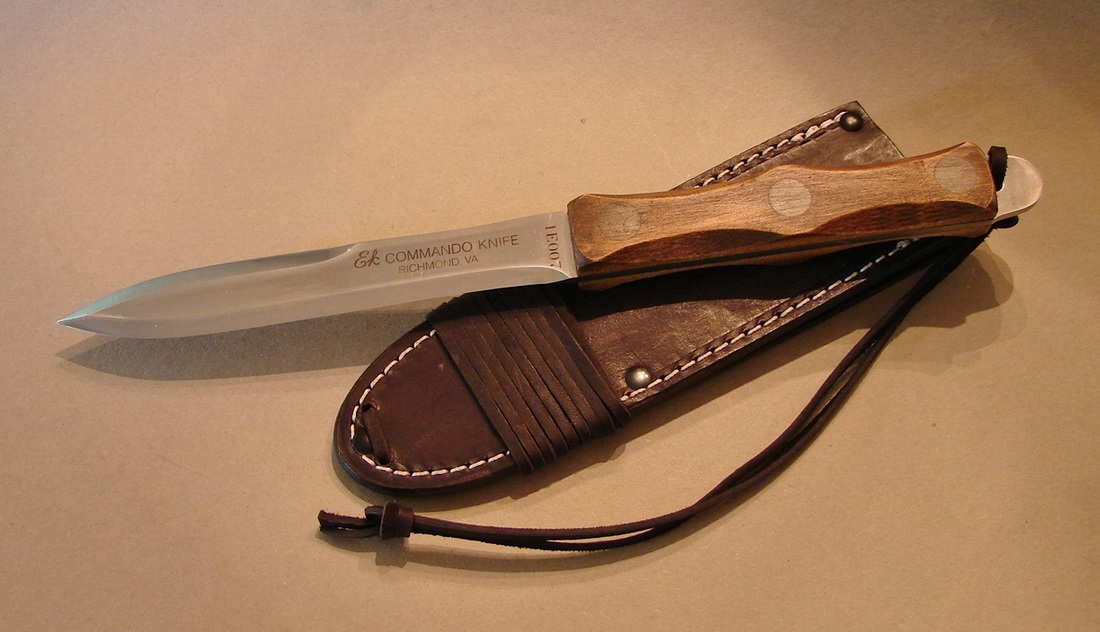 Below: Photos of my second WW-II repro knife issued by Ek Knife, a Model  2.
Below: My set of serial numbered Ek knives, a Model 1, and a Model 2. The both exhibit the 007 serial number. They are just like a page out of a 1940s man's magazine ready for combat and honed to a razors edge. There are not your usual buffed 440C stainless wall hangers that some companies make. Made from high carbon stainless they are full fledged fighting knives, descended from a proud lineage, ready to go in harm's way. 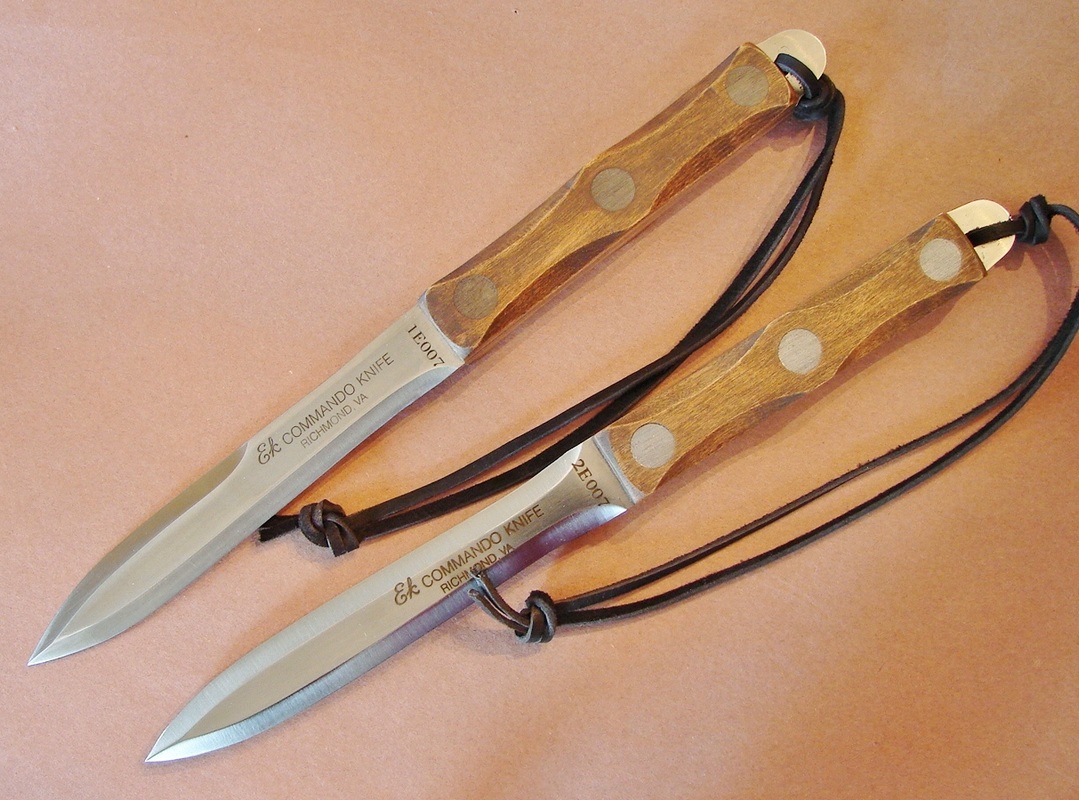