Smatchets, Kukri & Bush Knives
Fairbairn Smatchet:I decided to create a separate page for the few Smatchet I own and similar "hewing" type knives. In this photo the top one is modern made in India by Windlass Steel Craft, middle by Boker of Germany, and bottom one is an original WW-II unmarked knife. The handle on the bottom one has been modified by the owner to fit his hand. This was the beauty of having a wooden handle. The ones made with Bakelite or plastic handles could not be so modified.
A visitor to my site offered some additional information concerning post-war Smatchet. I have not verified this info. Thanks to Mr. Resweber for sharing.

"I'm sure you're aware, but just in case: I noticed in your smatchet section you did not reference "Well's Creek Knife and Gun Works" this was a company set up by Rex Applegate and if I recall correctly sold several of his variants of AF knives. This included the Harsey-Vallotton folding AF (eventually produced by gerber) and the Wells Creek branded smatchets produced in a lot of ~500 by buck."

Below: A custom Combat Smatchet by William Harsey. This is the most beautiful version of that weapon ever made. It is probably one of the most expensive too. This one is number 013. I have tried to contact Mr. Harsey to find out how many of this model he made. I love the subdued finish of the blade, micarta handle and bronze mounts. It has a tapered tang and perfect grind lines. It is not a lightweight but the balance is not too bad. I am selling one of my originals to help pay for it! 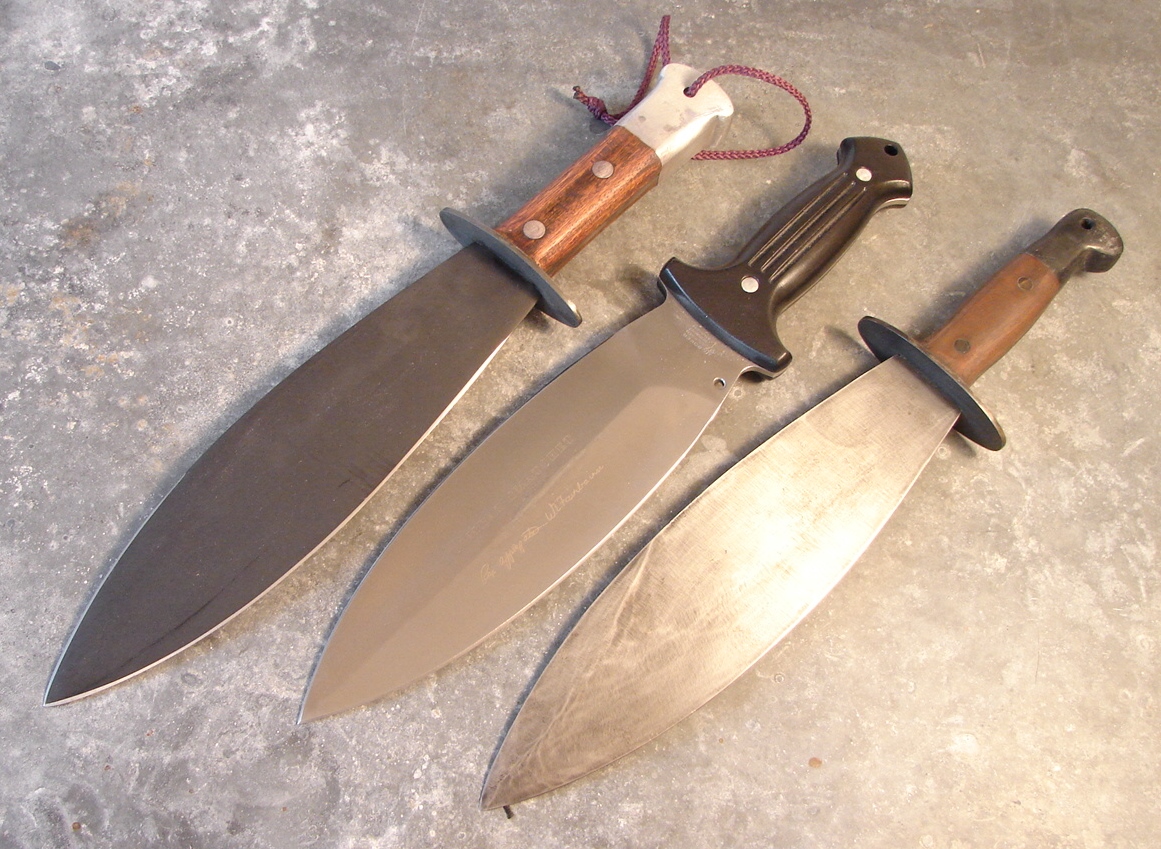 Below: Here is a photo of one of the rarer knives to come out of World War II and the mind of William E. Fairbairn. Not known as a humble man or one to mince words he named it the "Fairsword." The new owner described it to me in an email as follows. "I recently picked up what I believe is an original example of a Fairbairn fairsword with ball pommel and somewhat rough kinda fiberglas looking sheath with what appears to be 3 slots for holding something.[tools?] Italso has an off white colored bakelite? grips.this knife was brought back by an American soldier from the pacific theatre along with his eck (Ek) fighting knife that appeared to have part of the top of the handle removed. If you like I'd be happy to send you a photo for your archives. I haven't found much on the net about these but I think there is a good chance it may be a prototype fairsword, especially after seeing a very similar scabbard online. its has been sharpened and shows use,blade has some darkness, but was not too badly abused in my opinion." I am grateful that so many visitors to our site have been willing to share their stories and photos with us. The photo and description was provided by Rick H. This weapon was to be the successor to the Smatchet, but due to the ending of the war, Fairbairn could not find a manufacturer willing to take on the production. The knife is an improved version (over the Smatchet) in many ways, although I wonder if the added thickness of the blade would not have diminished its cutting ability. The rude format of the guard has all of the appearances of being a prototype. Anyway, thanks Rick for sharing this great piece of edged history with us.

"The psychological reaction of any man, when he first takes the smatchet in his hand is full justification for its recommendation as a fighting weapon. He will immediately register all the essential qualities of a good soldier -confidence, determination, and aggressiveness. Its balance, weight and killing power, with the point, edge or pommel, combined with the extremely simple training necessary to become efficient in its use, make it the ideal personal weapon for all those not armed with a rifle and bayonet."  Wm. E. Fairbairn "Get Tough"
Reproductions:
In many ways the modern recreations of the Smatchet are superior to the WW-II originals. Quality commercial Smatchet were made by Boker and Al Mar.  Custom ones were at one time available from Col Rex Applegate himself. They were made by Bill Harsey. Original WW-II British and American Smatchets are often found on Ebay but they can be quite expensive. An affordable alternative is the Paul MacDonald version.
The blade of the Boker version is etched with replicas of both Applegate's and Fairbairn's personal signatures. This knife is numbered 642 of 1,000 I believe. The shortcoming of the Boker version is that the handle is too fat, and being a phenolic material it cannot be filed or sanded down as the original wooden handled ones could. Besides this one fault it remains an awesome weapon.
Below: Using the Smatchet was not brain surgery, or maybe it was. 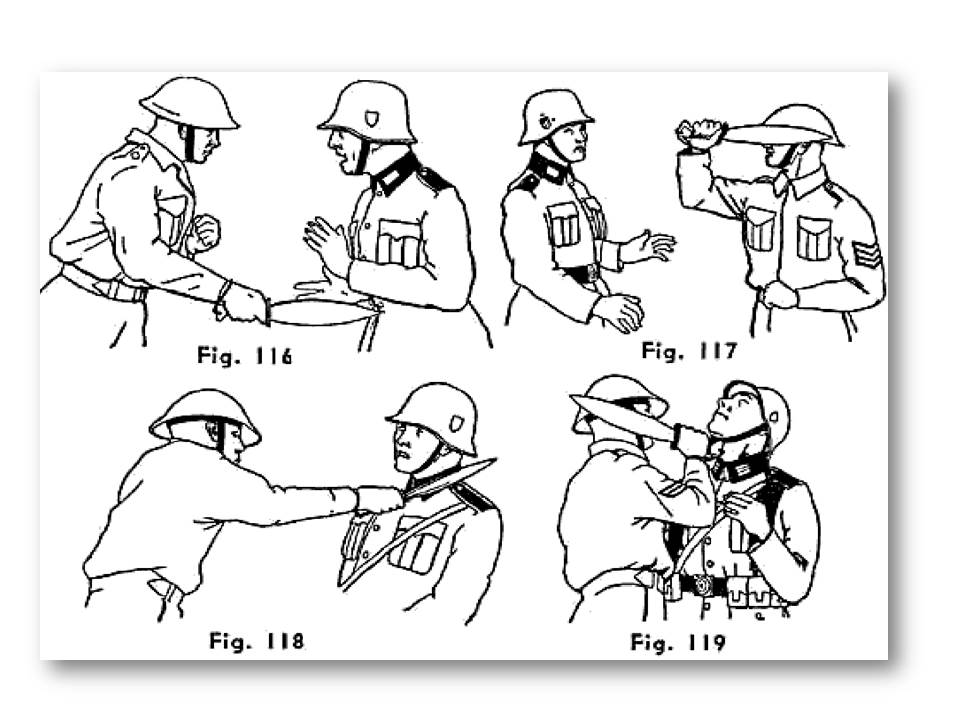 Below: In addition to Smatchet and various M.O.D. machetes, the men fighting in jungles often adopted indigenous brush knives and other large fighting knives. Here are some examples from the Filipines and Indonesia in our collection. The lower one was shipped home to a brother on the west coast using a large piece of bamboo for a mailing tube! 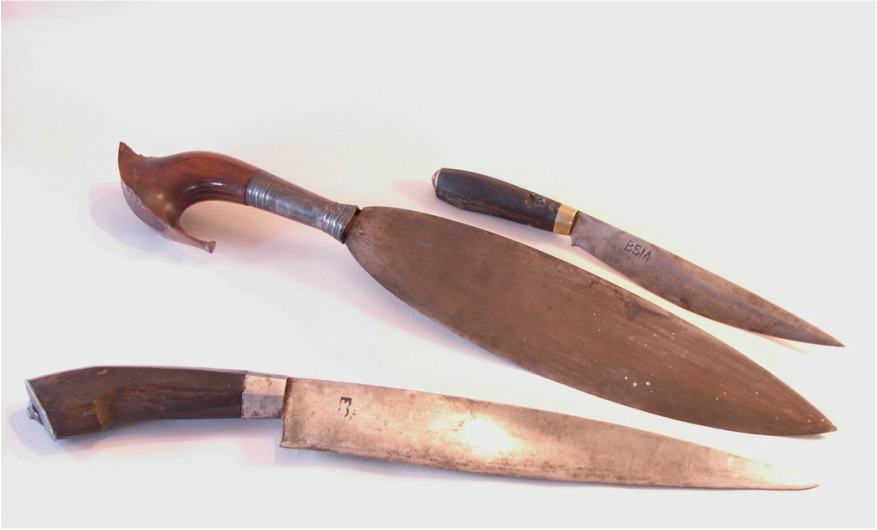 Below:  Was Fairbairn the actual designer of the Smatchet? Some people say not and give the credits to men working at Inverailort. Here we are showing a modern Smatchet, made by Boker, alongside a weapon made by Ted Frizzel owner of (MMHW) or Mineral Mountain Hatchet Works. Ted calls this his "boot knife." All I can say is I'd hate to meet the man who could fill those boots! I had lamented to one of my friends that no one makes a reproduction of the Fairbairn "Fairsword." He replied maybe because at least six companies have tried marketing the Smatchet and none of them made any money on it. Then I remembered this knife by Ted which I bought precisely because it replicates the Fairsword quite closely. The Boot Knife is the top one with the dark blade sitting above a Boker Smatchet. 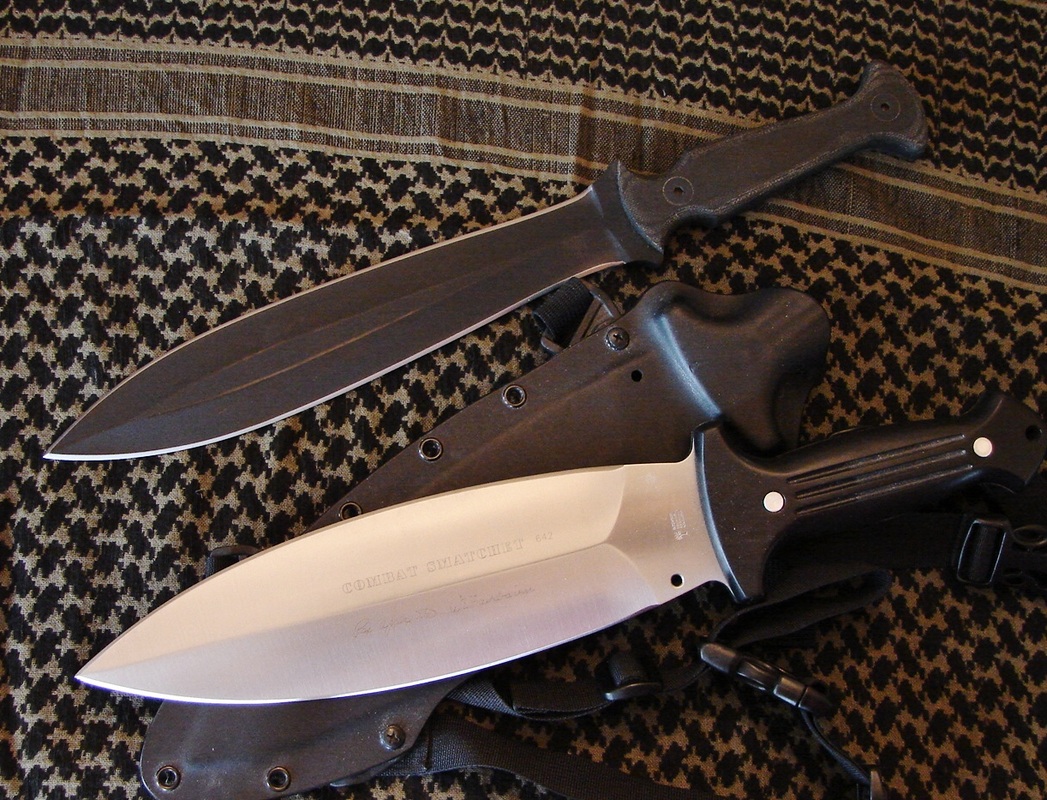 Below: Examples of the extremely rare and more elegant Fairsword. 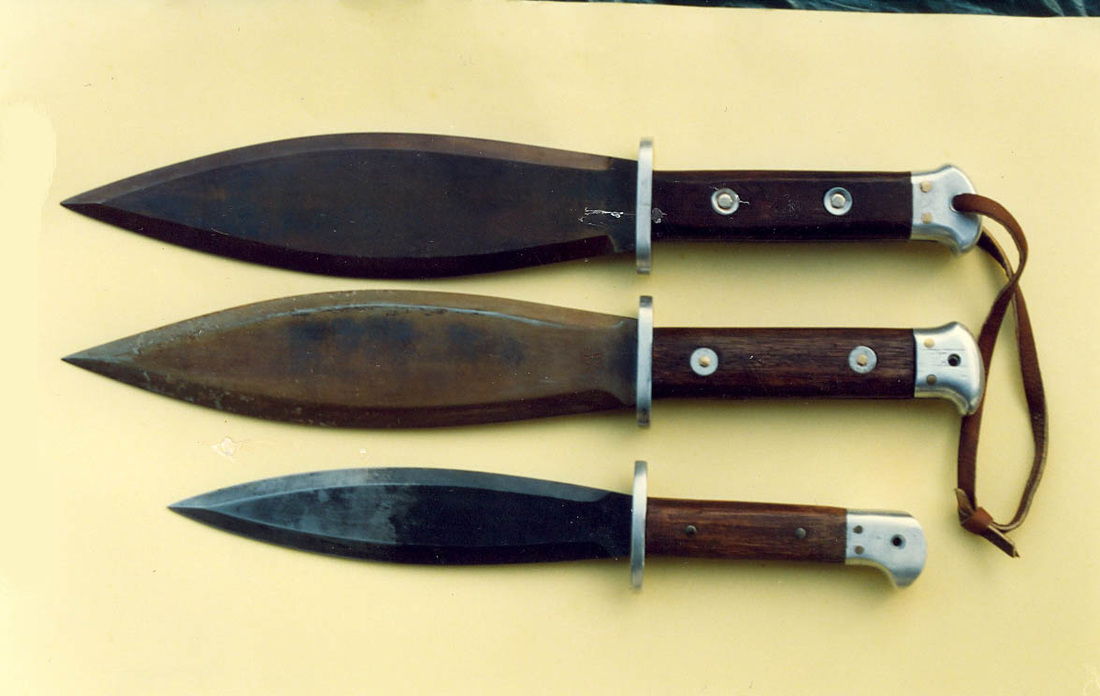 Kukri: World War Two and others
Below: "A mystery solved!" Collectors have been debating the origins of kukris stamped "TEMPERED STEEL MADE IN INDIA  ALLIED"
Recently we purchased items from a family who were able to answer the question of who produced these and when were they made: "my father, a machine tool engineer, was commissioned by General Slim to manufacture at great speed many thousands of these weapons."
http://www.qcmilitaria.com/kris.htm 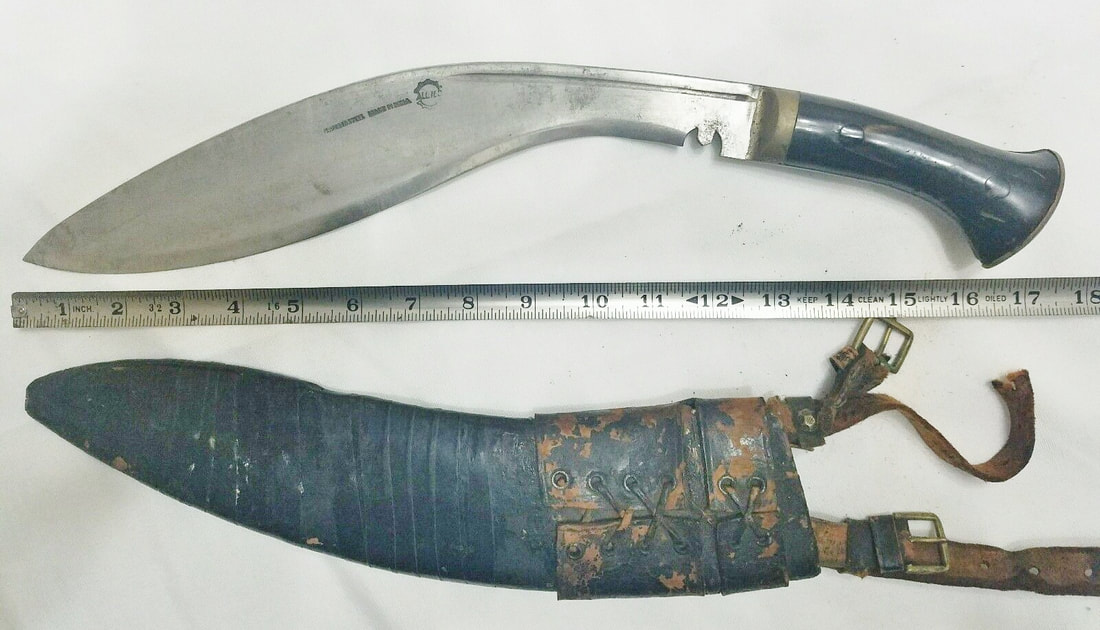 Below: If you have visited here long enough you may remember one time I posted that a visitor told me he found a Kukri that was marked "WSC". Another man who frequents this site told me that it was hearsay and he would not believe it unless I could produce an example. In an attempt to be accurate and to appease him I withdrew that paragraph. (Strangely enough I later found an example in one of his own books?) I recently bought this example from auction and it is a well-made knife. Although never sharpened, it still feels like an authentic knife, not a tourist version. I have handled many kukri and think I can tell the difference. The blade is clearly marked "WSC - 92." I assume maybe the 92 is the date of manufacture. It also has a rough chisel-cut broad arrow. Kukri were used very effectively by the fearless Ghurka (or Gurkha) regiments during WW-II.
Below: Quality reproduction of a WW-I, WW-II kukri made by Kukri House in Nepal. The Kukri is clearly a fearsome weapon! 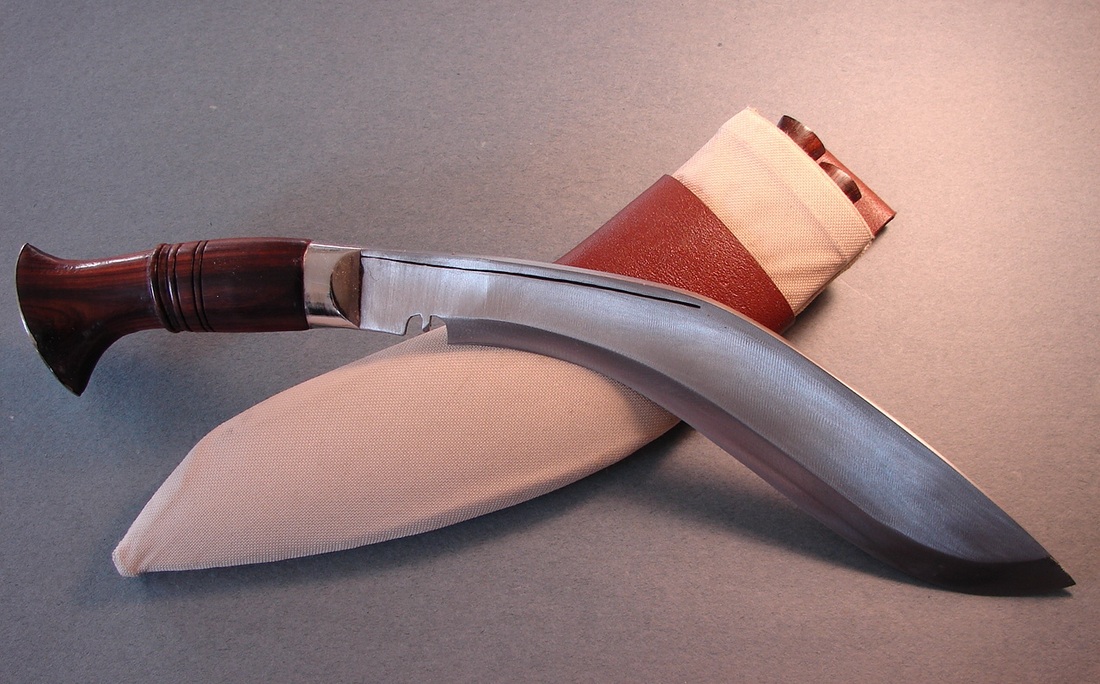 Below: More Kukri. Starting at the top is the Cold Steel modern reproduction with kraton handle. Next is a superb WW-II M-43, followed by an officers version with a bone handle. At the bottom is a civilian version called a Hanshi. It has a particularly graceful curve to the blade. I am not a Kukri expert so I apologize in advance for any mistakes in my descriptions. The knives pretty well speak for themselves as to their excellent fighting format. 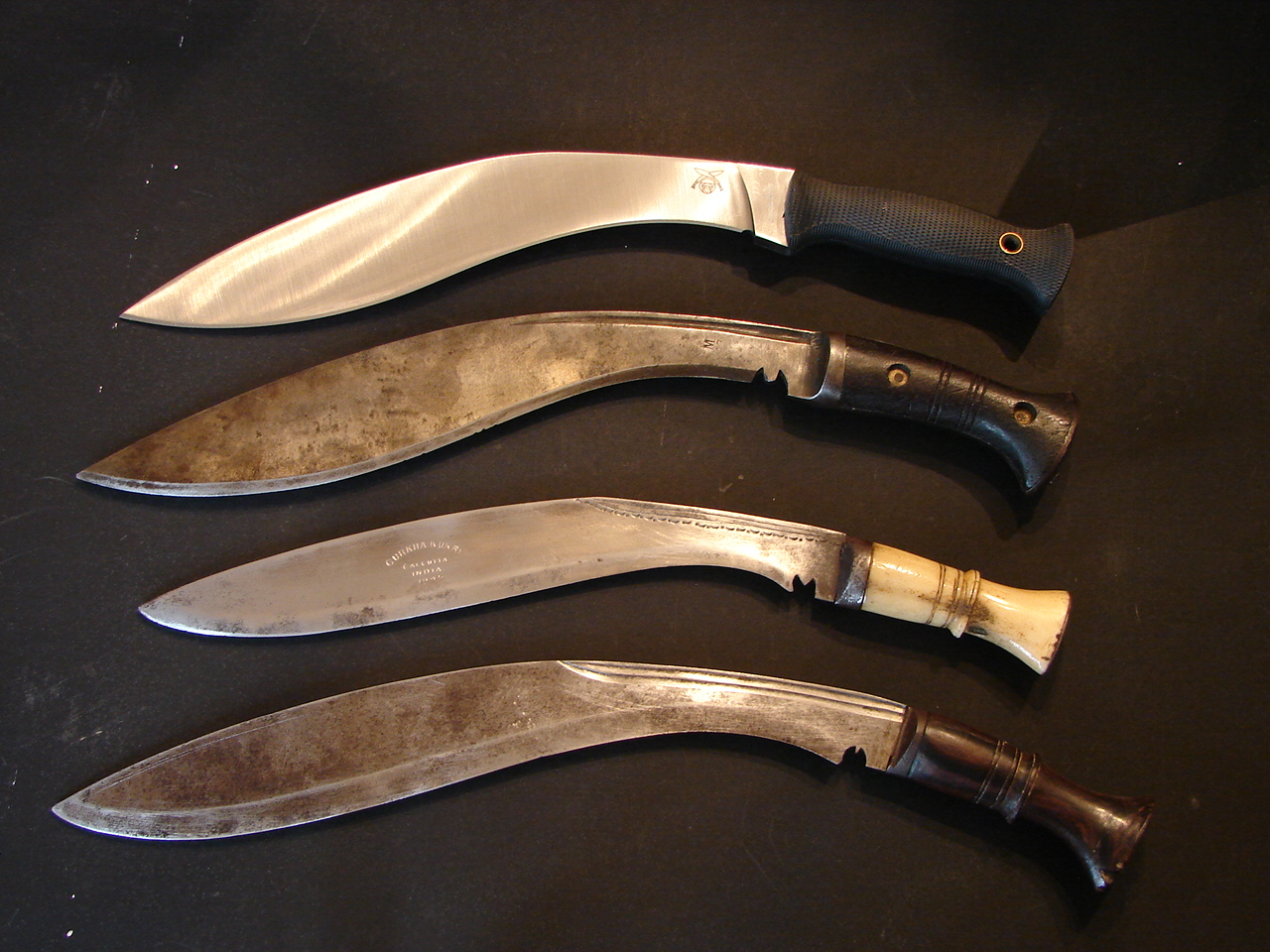 Below: Details of the fine leather work on the bone handled Kukri scabbard. Also shown is the blade stamping indicating maker and date. This would have been a fine, top quality Kukri in its day.