Below: Two nice Third Pattern knives, top one from the 1950s and the lower one a WW-II version from the 1940s. The top one is nickle plated while the bottom one has lost all of its original black coating. 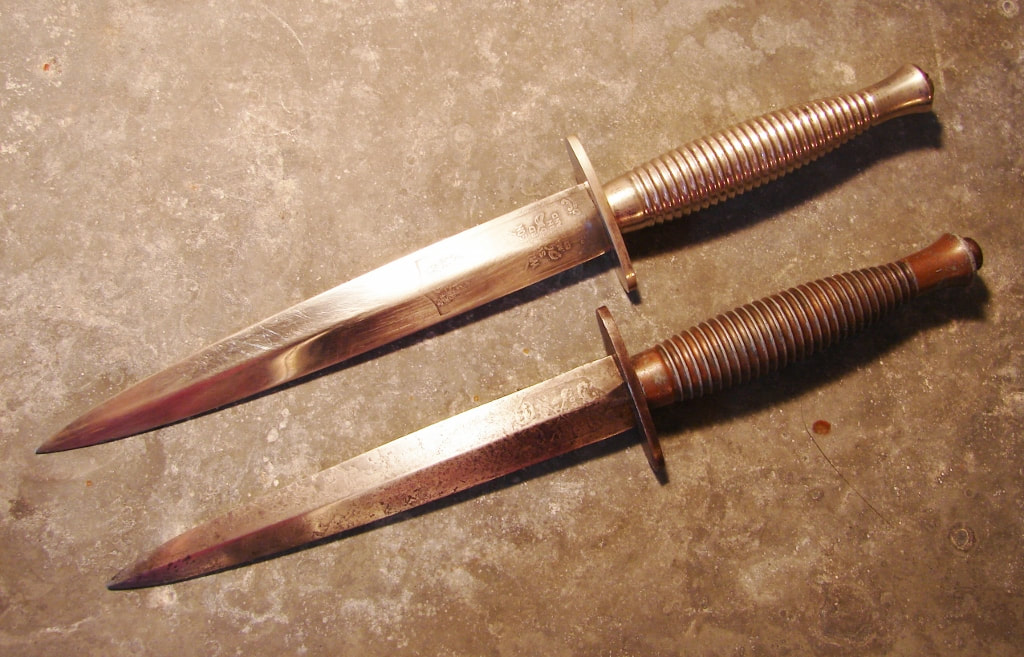 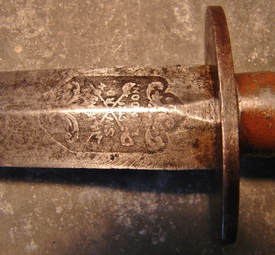 Below & Left: A standard WW-II Third Pattern Wilkinson knife. It is nice and tight but missing all of the black finish off the handle. The blade has staining on the side with the logo and yet is almost completely clear on the back side. As usual there was no sheath with it and no story. Etched WW-II third patterns are fairly rare out of the many hundreds of thousands of P-3 produced. Only by accident did I notice the remnant of an F-S logo on the back side of the blade. The faintness of the etching now leads me to believe this side was polished out at some earlier date nearly erasing the logo.

The top nut is not messed with nor does it have any clamp marks. The knife is all original. Since very few of the knives exist with the original black finish on the handle I can only assume that whatever they used was not a good solution to darkening the handles. This would have been a very attractive knife when it was new, back in the later years of the war. Many men complained that the Third Pattern handles were slippery when wet with perspiration or blood. I do not think the grooves enhanced gripping, and in fact, may have made them harder to grip. Of all the Fairbairn-Sykes designs, the Fatman with its coarse knurling, may have been the best. 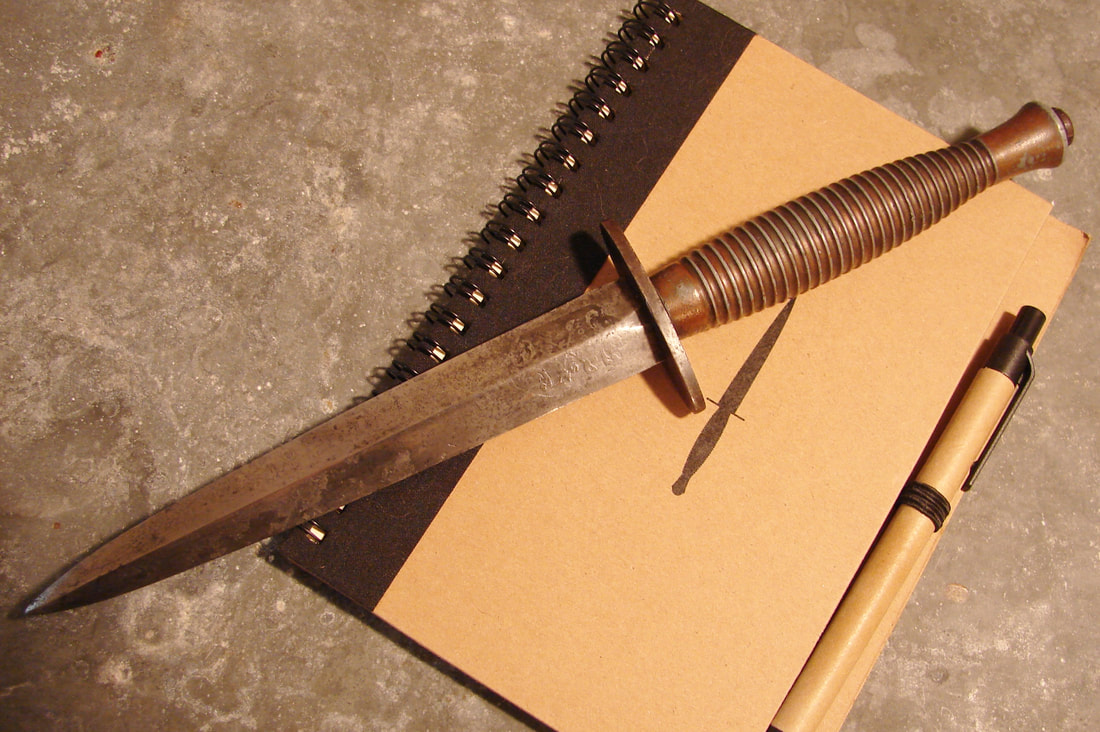 Below: There is no doubt this is post war nickel plated P-3 based on the blade etching and the style of top nut. I suspect it is from the 1950s. The quality is excellent and the blade is actually sharp!The center portion of the logo is totally erased. I suspect it was done on purpose since the edges are still intact, so it is not from sharpening. Why the portion was removed that said: "By Appointment to Her Majesty.." blah blah blah. i don't know. Maybe it was owned by an angry Irishman or someone else who did not like the Queen. The knife is nice and tight and has never been apart. I would think the sheath should have a nickle plated chape but who knows. It is a battle worthy knife and very well cared for. (other than the logo)

Second from the left: is what I believe to be a Korean War vintage knife. I could be all wrong and if anyone has specific knowledge of the dating of specific Wilkinson logos/etchings please contact us. 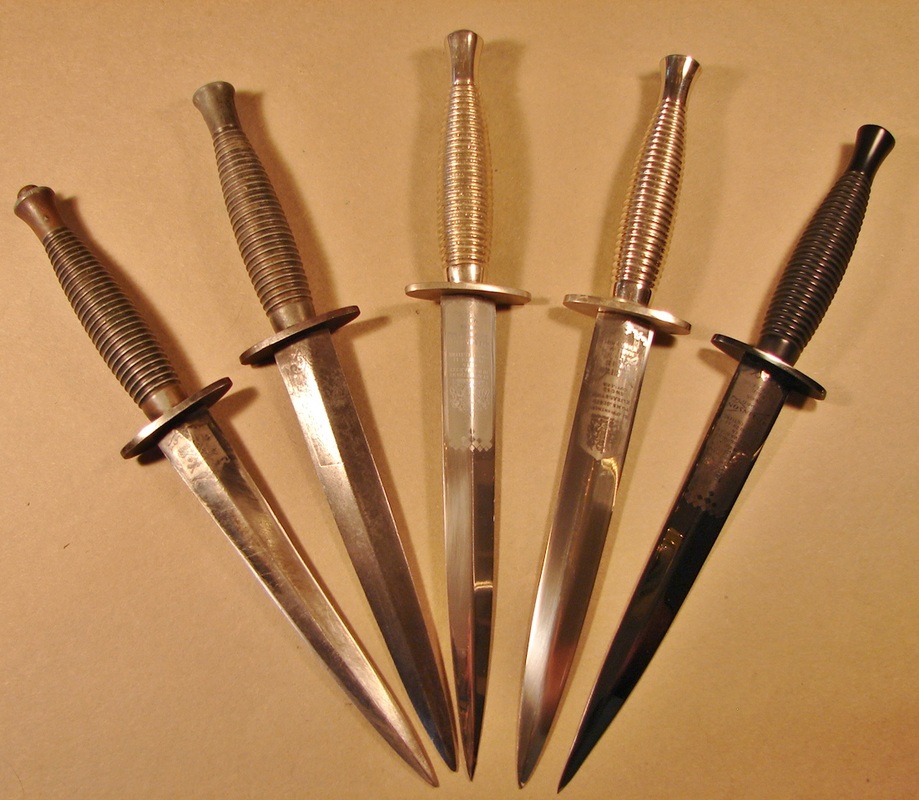 Below: A spray of the Wartime and Post War Wilkinson third pattern blades. 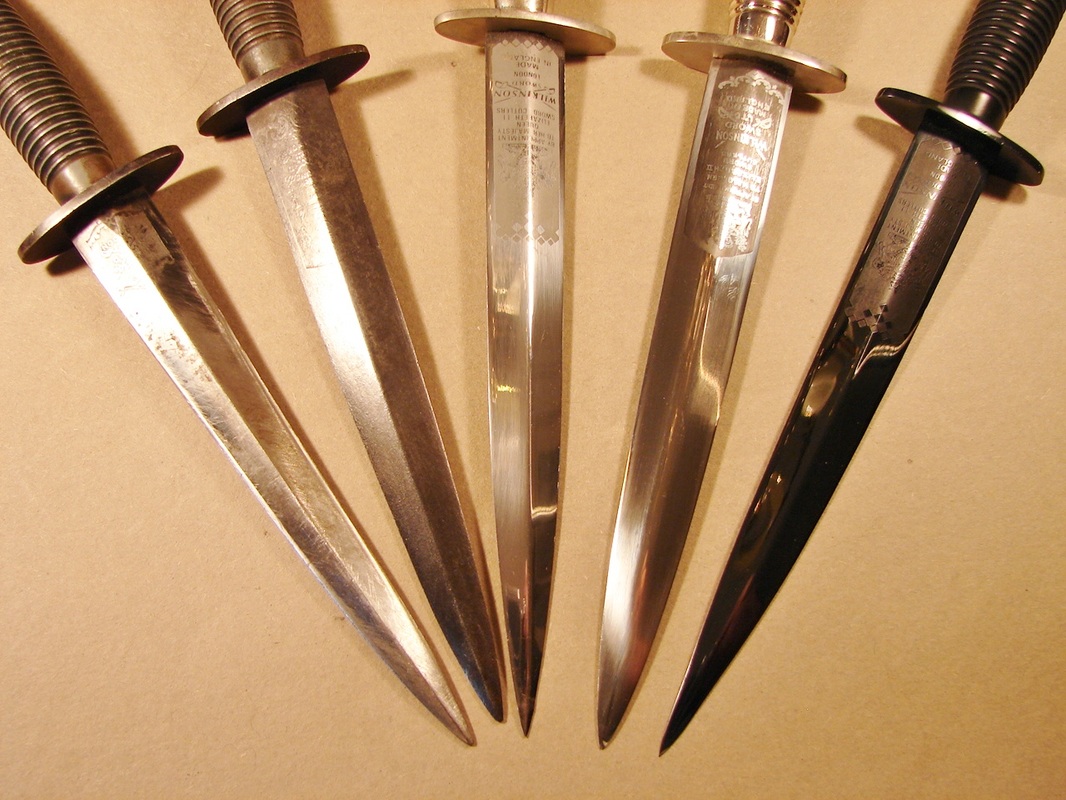