Below: Kelly Yeaton left and his brother Samuel right. Kelly was a professor and also involved in theater in the US. Samuel was a Marine stationed in Shanghai where he befriended William E. Fairbairn. Kelly offered advice on design work and Samuel was hands-on in China. The shanghai dagger was the brainchild of Fairbairn, Sykes, the Yeatons, Sam Moore and Sam Taxis. I think Sam Yeaton and WEF were the prime designers. It is presumed to be the prototype for the First Pattern F-S knife, but I believe somewhat differently. All Yeaton photos are courtesy of the family.

Here is a very interesting story from a visitor to our website. This is a genuine specimen with unquestionable provenance.

"Greetings,
I have this family heirloom and I wonder if you might be able to shed some light on it. This "knife" is from the estate of my great uncle, Henry Martin.  Uncle Henry was part of the US Navy Shore Patrol in Shangia where he met Fairbairn. Henry Martin (of Burns Martin Holsters) made some spring shoulder holsters similar to the Burns Martin "lightning" holster for the knives of Fairbairn and his men.

I understand this knife was a gift from Fairbairn to my great uncle, in appreciation for his help and collaboration. I had understood this was a prototype for the production knife, but your website clearly has many similar styles predating this knife and I'm not sure if the dates line up.

The blade and guard are not good steel, and the handle is wood. However, both sides of the blade are inlayed with an intricate gold oriental dragon. One faces the tip, the other faces the hilt.

I do not have a holster or sheath for this blade. (The double shoulder sheathed knives on your site do not appear to be the Burns Martin type.

Thanks in advance for any info you might have.Regards,"  (Name withheld by request) 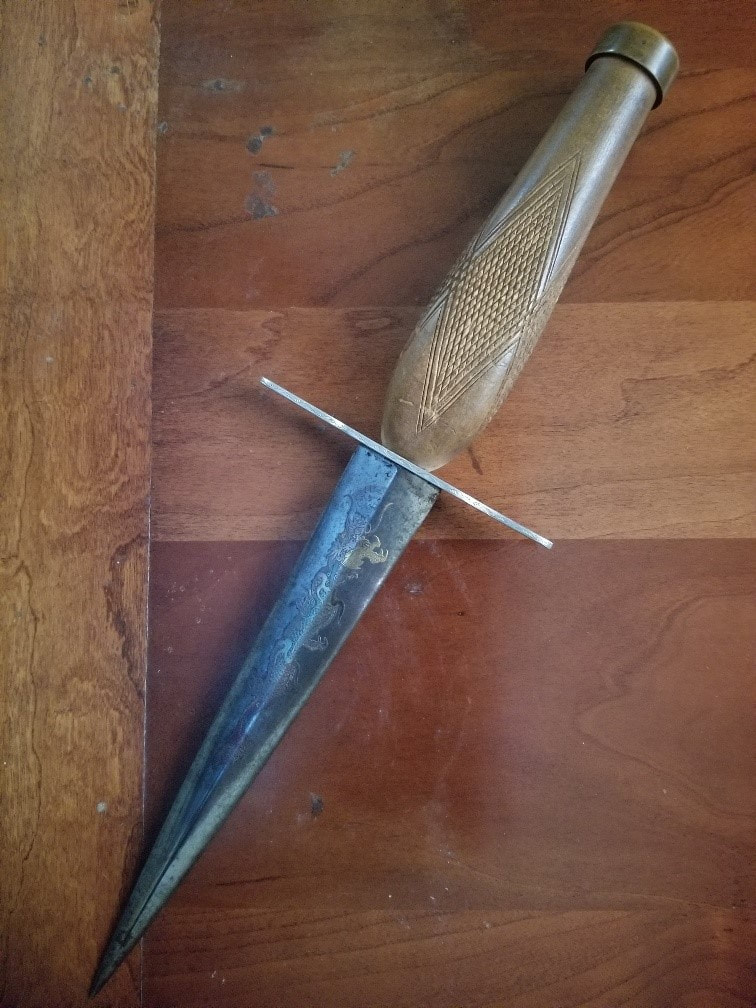 These are the real thing! Shown below are two verifiable and original daggers made in the SMP armoury circa 1933. The blades were made from 1888 or 1903 Lee-Metford bayonets. The grips are hand-checkered Chinese boxwood with aluminum guards and cast brass pommels. They were carried in upside down (point up) quick-draw leather shoulder sheaths made in the USA by Burns and Martin Holster makers. I have been fortunate to hold and handle these knives and to have befriended the owner and heir of one of the original designers. 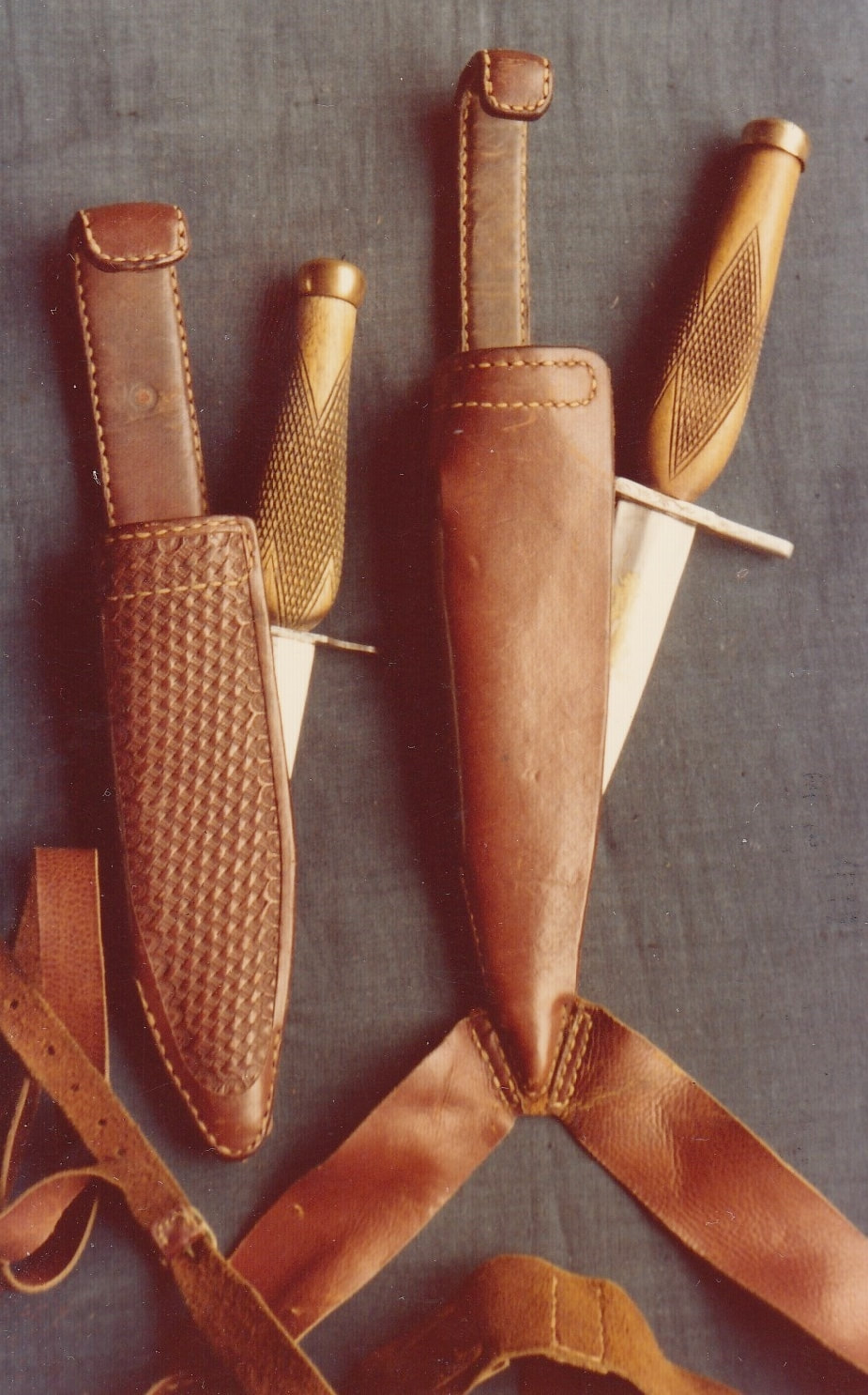 Chinese dragons are inset in gold into the blade of the larger one.  The engraving and infill were the work of a highly skilled Chinese craftsman named Komai. ​The smaller one is known by the family as the "prototype." 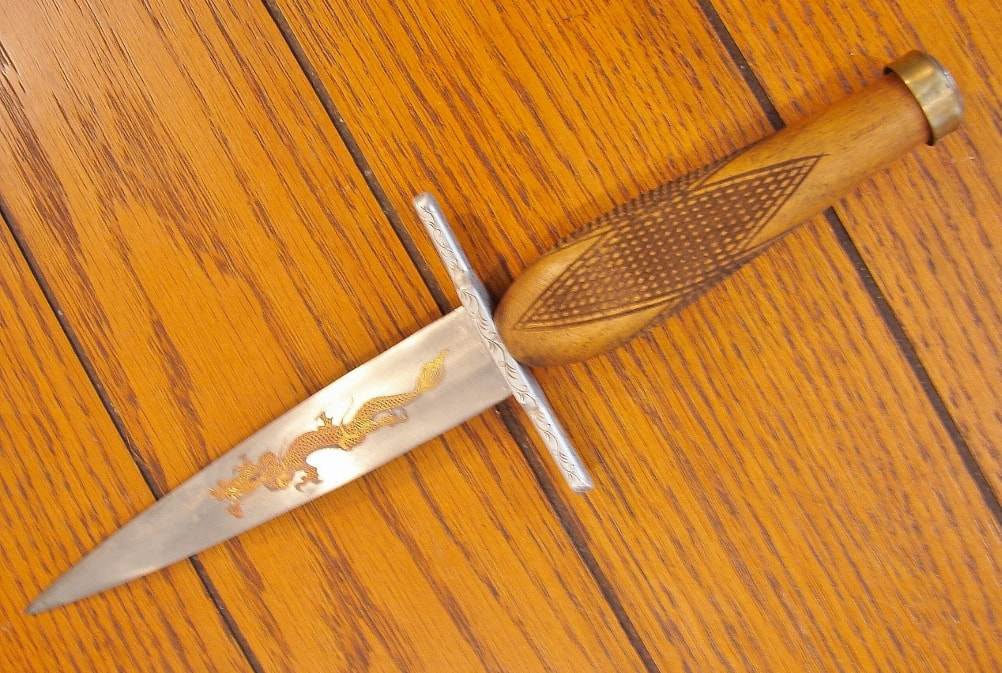 Below: Here is another fully authenticated Shanghai dagger. This one has the chequered carabao handle with some chipping near the engraved pommel. It has not been determined who this knife was made for.  The "chit" in the background was used to help ensure downed pilots' escape capture in the Pacific theater. The natives would lead them to safety. This one is painted on a piece of calfskin. This was sewn to the back of a leather pilots' jacket. I apologize for the wrong photo being loaded here before???  Software glitch. 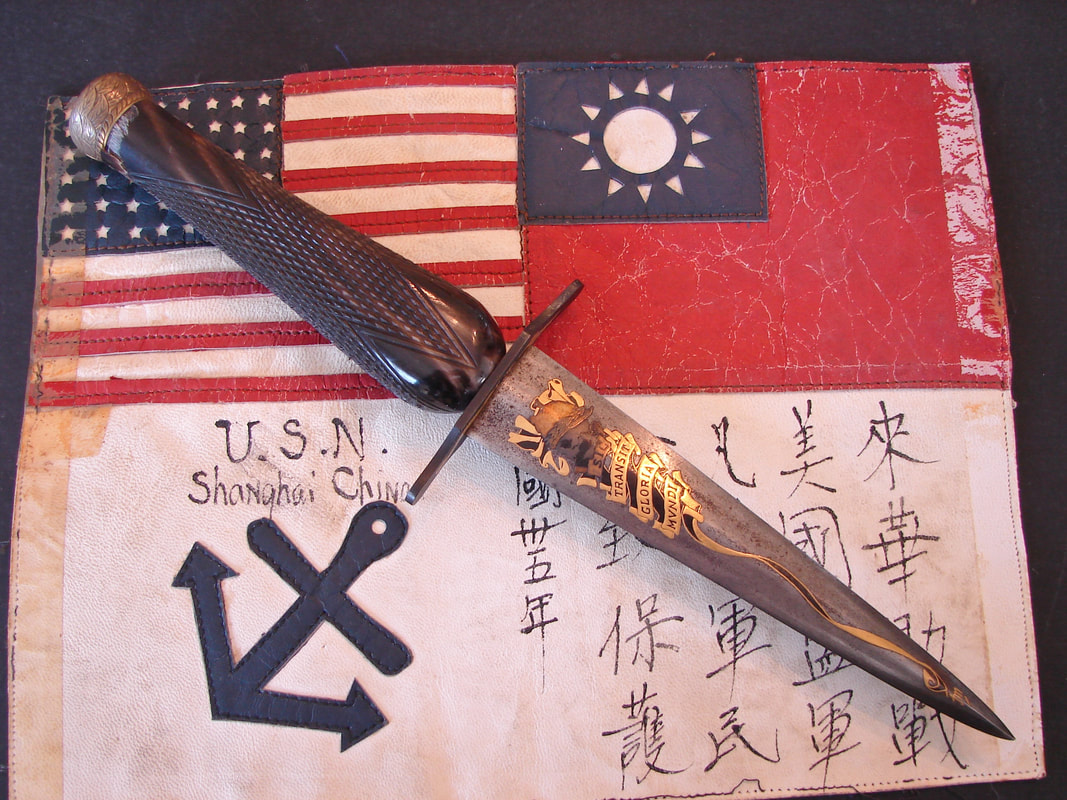 Below are two Shanghai daggers that I own whose provenance is not completely clear. The stag hilted dagger came from a notable author on arms and who is especially familiar with Fairbairn knives and a personal friend of the late Dorothea Fairbairn. This dagger may have possibly come from Australia. It is also one of two that I have seen with a copper habaki on the blade. The wooden hilted version is the same exact proportions as the previous dagger called the "Prototype" by the Yeatons. 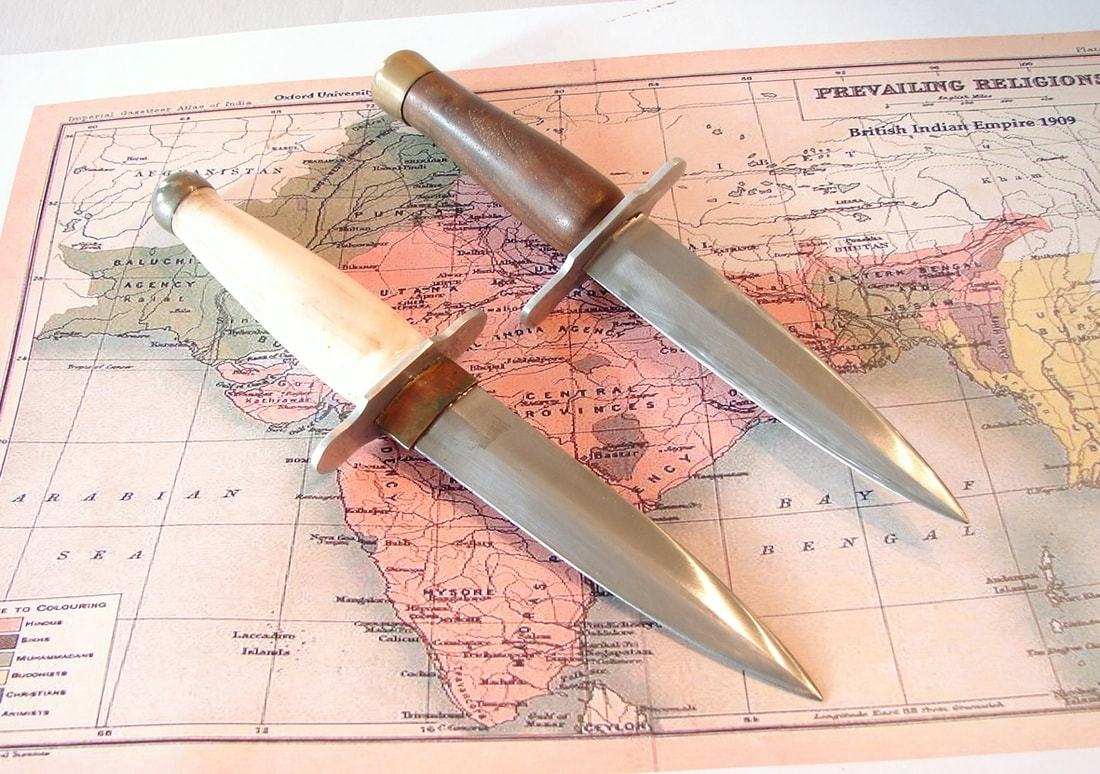 Below: Here are two exquisite Shanghai style daggers made by my good friend Paul MacDonald of Edinburgh, Scotland. I provided Paul with the dimensions from my wood handled version. He spent a lot of time perfecting the chequering, which was a new skill he had to develop. I have copies of correspondence of Fairbairn's ordering checkering tools while he was in Shanghai. He also checkered grips for 1911 pistols. 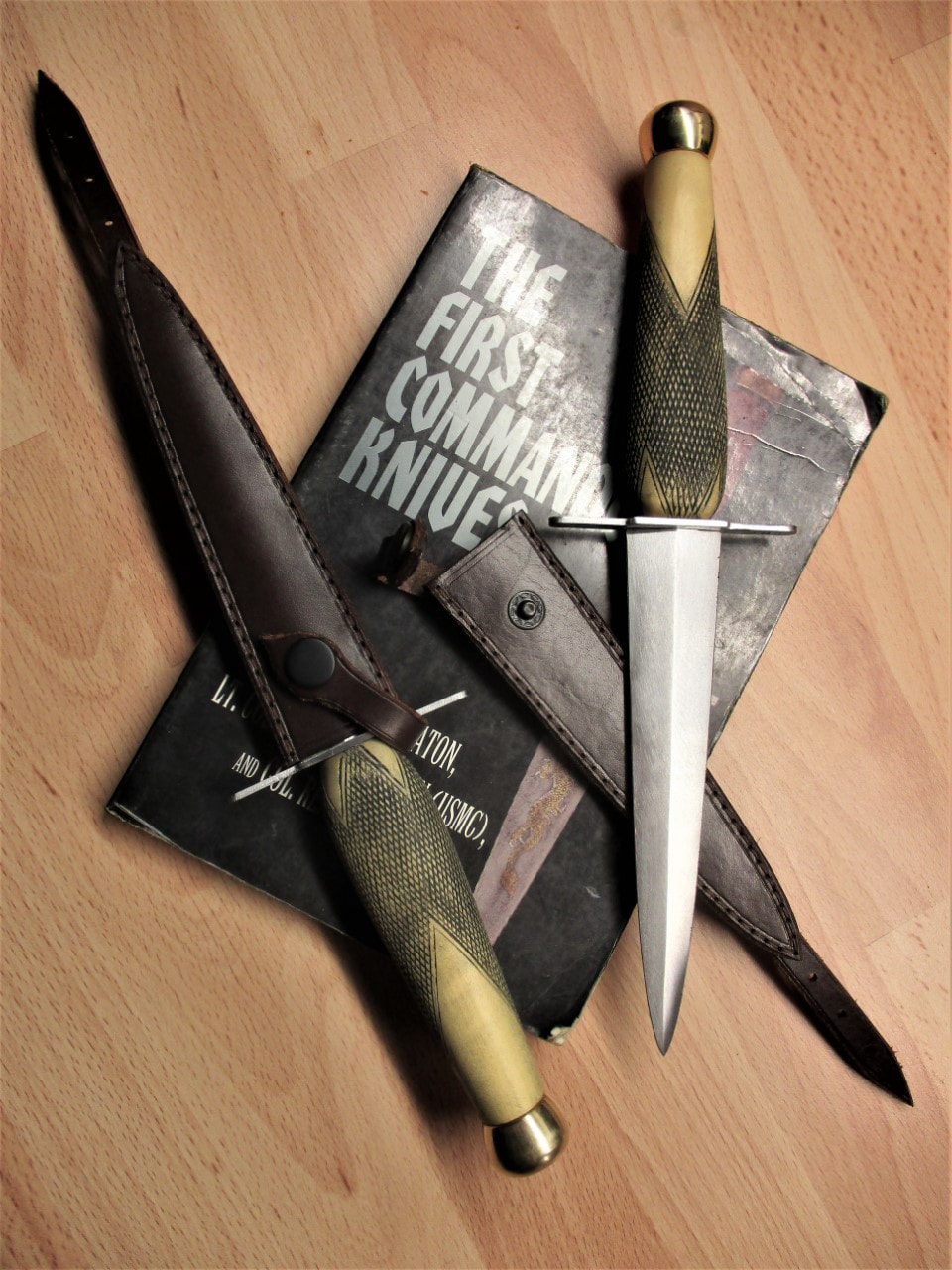 Below:  This Shanghai dagger has a sound provenance although it does not match any of the other versions. The owner is anonymous but has provided me with a solid story of his acquisition of the knife. That story will be in my book if i ever get it into print. It is notable for being made from the ricasso end of a 1903 Lee - Metford bayonet blade. The majority of the SMP daggers I have seen used the pointed end of the bayonet blade. Unfortunately, this is the best photo I have of the knife.